A low-lying slender form, an overhanging roof and sliding glass doors are among the modernist-influenced features at this Indianapolis residence by architecture studio Deborah Berke Partners.

When designing North Penn House for a family, the New York-based firm form drew on elements found in modernist dwellings built in the surrounding area during the 1950s and 1960s.

The design also responds to the property's secluded wooded setting at the top of a hill, which leads down at the back to a meadow.

"We conceived of the house as a long low volume with a big roof that would define the edge of the slope and allow the family to inhabit this overlook and feel intimately connected to the surrounding trees and meadow," said Deborah Berke Partners principal Noah Biklen.

The simple, slender, single-storey form takes cues from its mid-century neighbours, while dark zinc cladding helps blend in with the hues of the surroundings. Floor-to-ceiling glass doors are slotted into the central portion, opening up views from the main living area to the outside.

At the rear, these doors slide open onto a terrace and the roof cantilevers above to offer shade. On the other side, it projects to rest on slim columns, commonly used in mid-century designs and known as pilotis. Rectangular openings puncture the roof to allow natural light to access a bed of plants underneath.

While the open-plan living, kitchen and dining room occupies the middle glazed section, private functions like bedrooms are placed in the areas either side. Windows from these rooms face the rear to maintain privacy. 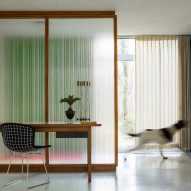 "The design of the house balances literal transparency — where the public rooms of the house connect to the expansive landscape beyond — with privacy, so each of the bedrooms has a view to the outside that is quite focused," said studio founder Deborah Berke.

In the living area, the architects inserted two volumes clad in locally-sourced pine. A fireplace is built into one of these and the other houses the kitchen, featuring white cabinets that contrast a blue tiled wall.

These boxes "bookend" the lounge and dining room, where limestone flooring extends from the inside to the patio outdoors.

Mid-century furniture is mixed with contemporary designs by Lindsey Adelman, Montis, BDDW, and Chadhaus, finishing the space in a warm palette of leather, wood and brass intended to reference the huses outside.

"The colours and materials of the interiors draw on the architecture and the environment," said senior principal Caroline Wharton Ewing. "It's an indoor-outdoor family house, and the living room is really the heart."

The firm split the rest of the spaces to create separate areas for the parents and the children. The adult's section occupies the northern end, and includes a master bedroom that opens onto a patio, two bathrooms, dressing rooms and offices. Three rooms and a den are set on the southern side in the children's section.

Deborah Berke, who currently serves as dean of architecture at Yale University, set up the New York-based firm in 1982. The practice recently completed another residence in the Hamptons that has two workout areas.

Indianapolis is the capital of US state Indiana, which is a treasure trove for mid-century modern architecture. Both the cities of Columbus and Fort Wayne boast several notable examples of the style.

Photography is by Chris Cooper, Glint Studios and Kevin Miyazaki.