The project, developed by Brookfield Properties and Hearst, includes a privately owned public park surrounded by a new residential and commercial tower along with rehabilitated historic buildings, including the SF Chronicle Building.

Oriented around the public spaces, which include the central park and the top of the SF Chronicle Building, 5M foregrounds "the unique alleyways of SoMa", according to Laura Crescimano, co-founder and principal of SITELAB Urban Studio.

"The goal of the overall master plan and design for 5M was to integrate the traditionally dense downtown space and the culturally rich, artistic neighborhood that is SoMa," Crescimano told Dezeen.

A series of towers have been designed for the four-acre (1.6-hectare) site. The first, by KPF in collaboration with House & Robertson Architects is called 415 Natoma. This 25-storey tower has stepped, interlocking masses with two primary towers that have vertical stripping on the facade.

The two towers meet horizontal massing at the lower levels, which have open space for socialising that face into the plaza, and areas reserved for dining and retail options.

Also on the site is The George – a 20-storey, 302-unit apartment building by Ankrom Moisan – while another building called N1 is planned. In total, 5M will provide 245 residences.

Across the development, the height of the buildings is indented to be a middle ground between the lower structures of SoMa and the towers of downtown San Francisco.

While envisioning the neighbourhood as relying on the preexisting culture of SoMa, Crescimano said the design moved forward with a "fabric first" approach.

"We intentionally designed this space to support a plethora of community programming and events, including those that will be hosted by arts and cultural nonprofits and other innovators such as CAST, Kultivate Labs, Off the Grid, and the Filipino Cultural District," she said.

The public spaces were designed by Melk and Cliff Lowe Associates, which shaped The Parks at 5M around public art and thoroughfares.

SITELAB undertook a lengthy community engagement process during the planning.

"The open space was designed with a stage to support events like the annual Filipino Heritage Festival and aspects like the varied seating support multi-generational use," said Crescimano. 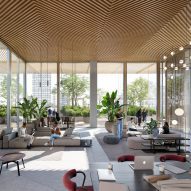 In addition to adhering to the environmental standards of San Francisco, the project aims for "social sustainability" according to Crescimano.

"The alleyways also increase the walkability of the neighborhood and reduce the dependence on cars, which improves air quality and overall health in the area," she said.

Other mixed-use projects in San Francisco's downtown include a proposal from Foster + Partners to build a community in a decommissioned power plant.

The photography is by Kyle Jeffers unless otherwise stated. The top image is by Brookfield Properties/Steelblue.