American musician Ye, formerly known as Kanye West, and design technology company Kano have launched Stem Player, a pebble-shaped device that allows users to customise songs in the palm of their hand.

Stem Player lets users control the vocals, drums, bass and samples – the "stems" of a track – by swiping their fingers across the grooves of the device as they listen to music.

"We wanted to create a living album that allows you to remix the songs, add effects and listen to the music differently each time you repeat use," Bruno Schillinger, lead product designer at Kano, told Dezeen.

"It is a way to be a participant in the listening experience and it really challenges the idea of what an album can be."

The device gets its name from the music production term "stems" – individual sections that make up a song. Stem Player allows users to speed up or slow down different sections of a track, as well as reverse and loop parts of the song.

It also incorporates haptic feedback, as users slide their fingertips over the silicone-covered object and the lights flash in real-time to changes in the song.

The designers see this "return to primal interactions" as an antidote to popular MP3 players on the market, which are usually controlled by users tapping or scrolling on black screens.

"One thing that we set out to do from the beginning was to use very primary dots of light and colour to signify function," explained Schillinger.

"The grooves in it – the channels that you slide your finger across – are supposed to be a little bit like meditation stones that you can stroke to make you feel calm," he added.

With this brief in mind, the team set about creating something that could be intuitively used by children. The interface is designed so that it reveals itself as you watch it, with the stems pulsing to the data.

For example, you can watch the vocal stem move up and down as the artist speaks, and the speed of your loops is mirrored by the pace at which the lights move.

Users can listen to music directly from the MP3 player, which can also be connected to headphones and speakers using bluetooth or cable. 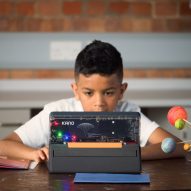 Microsoft and Kano partner on build-your-own PC for children

In their quest for simplicity Ye and Kano looked to nature for inspiration, which is why the Stem Player resembles a smooth pebble.

"Kanye has this mantra where nothing should have sharp edges and everything should be rounded as it is in nature," explained Schillinger.

"As a result, we also looked beyond stones and pebbles and were really inspired by ancient artefacts."

Ye and Kano have been working together on the device since meeting at the Consumer Electronics Show in 2019 and believe that the Stem Player has the potential to revolutionise music in a similar way to the iPod.

"[It] lets you go from listening to music to creating and then you're building new creations – but then at a press of a button, you go back to listening," James Hicks, lead designer at Kano, told Dezeen.

"I think that way to move from consuming something to creating something in single seamless transition is something that doesn't really exist anywhere else in music."

Playing it on the device will also be the only way people will be able to listen to Ye's upcoming album Donda 2, in a move that Ye and Kano believe will give control back to the artist – especially when compared to releasing the album on a streaming site like Spotify.

This is Ye's first music-playing device, but the musician is no stranger to product design. His previous projects include footwear line Yeezy and an ongoing partnership with high street retailer Gap.