San Antonio-based firm Overland Partners has released plans for a binational border park between Mexico and the United States that will be built along the Rio Grande.

The design incorporates 6.3 miles of land over a thousand acres on both sides of the river, which is known as Rio Bravo in Mexico, connecting the cities of Laredo in Texas and Nuevo Laredo in Tamaulipas.

Overland Partners was selected to lead the project alongside Able City, a local architect studio in Laredo, through a public submission process.

The team was selected during a meeting between officials from both countries, held to facilitate tourism, trade, and economic growth for the states on both sides of the border.

"The cities had envisioned over 40 individual projects on both sides of the river that would contribute to the restoration of the site ecology, the celebration of their joint culture, and revitalisation of the economy," said Rick Archer and Barbara Warren of Overland Partners. 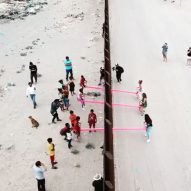 Overland Partners held a three-day work session with the representatives of both nations, including the border patrol agencies, to identify key themes for the project. These themes included environment and ecology, culture, security, economy, and binational community.

Overland Partners took the suggestions for the individual projects and combined them into a cohesive plan. Olin and Arup brought international expertise to the project.

Three large areas will constitute the park. The first is a 2.5-mile-long ecological restoration area northeast of the cities.

The second is a mile stretch in the urban cores along the river that will be framed by bridges and feature an amphitheatre.

Finally, a recreation area will stretch for three miles and terminate at the Nuevo Laredo Zoo. 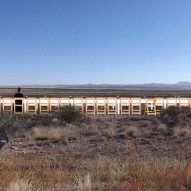 "We have envisioned a shared Binational pedestrian bridge that physically connects both sides of the river as an extension of the park," said Archer and Warren. "Citizens of both nations would have a shared space for community before checking through customs".

Park to embrace idea of two cities as single community

"This park is a real solution to pressing challenges on both sides of the border," said Archer and Warren.

Historically, one city spanned both sides of the river and was only divided when hard national boundaries were drawn. The design is envisioned as an "abrazo", or embrace, between the two Laredos.

"The reason this park is happening is because Los Dos Laredos, the two Laredos have always seen themselves as one single community with a unique shared culture," said Archer and Warren.

The park will be a shared space along the binational river that citizens of each country could share before crossing the border.

"It is our hope that this conversation will stimulate similar conversations in border cities from Tijuana/San Diego, all the way to Matamoros/Brownsville and around the world," the studio told Dezeen.

The US-Mexico boundary drew attention during the Trump administration, which pledged to reinforce and extend the border wall between the two nations.

Several design projects challenged this idea, including a series of pink seesaws inserted between an existing fence, which was named Design of the Year 2020.

The rendering is courtesy of Overland Partners.