The twisted, grey trophies aim to reveal the material's opportunities within the design industry and were created by Archisource and Sandhelden for Archisource's annual Drawing of the Year Awards.

Sandhelden 3D printed the trophies using binder jetting technology, which uses a layering process to 'print' an object into shape. Layer by layer of quartz sand is glued together by binder agents typically used in the foundry industry.

The binder used for the trophies was Furan, which is made from renewable resources including sugar cane, corn husks, or rice hulls, according to Archisource.

3D sand printers ExOne GmbH and Voxeljet AG, which Sandhelden says are "pioneers for this particular technology," were used to construct the trophies.

Both printers work in three similar steps. After recognising the 3D design, the shapes are printed in layers with high-precision nozzles. Afterwards, the printed object is exposed to air pressure to remove loose grains of sand.

Archisource says that binder jetting does not require high temperatures, and instead can be compared to a glue that quickly solidifies at room temperature.

"However, printed parts in binder jetting are rather fragile," said Sandhelden. "Therefore, it is necessary to apply our patented process in order to increase its stability substantially."

The binder-jetting process also allows high levels of precision, which enabled the designers to create wave-like patterns on the trophies' surface.

"We wanted to explore the binder-jetting process, and we were very excited by its ability to resolve very detailed surface textures," said Archisource. "The high levels of precision allowed us to achieve intricate and interesting patternations on the surface."

"The finish of the surface, coupled with the natural texture of the sand, makes holding the trophies quite a unique experience," it added.

According to Archisource, sustainability is an important factor in its designs and locally-sourced quartz sand was used to make the trophies.

"Our production facility, main partners and suppliers are all located in Bavaria," Sandhelden explained. "We even source our quartz sand from regional sources to minimize the carbon footprint." 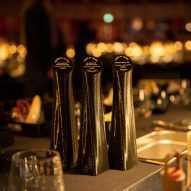 3D printing is considered an expensive resource but according to Archisource, binder jetting is up to 40 per cent more economical than other processes, as any excess material gets reused to minimise waste.

"The designs of the trophies are also constructed in a way that as little material is used as possible," Sandhelden said. "We do not burn or melt sand in the production process as some other 3D printing technologies do. We have a binder-based process that allows a low energy production."

For the 2019 awards, Mamou-Mani Architects designed the trophies from sugarcane bioplastic using computational design tools, which aim to showcase the "possibilities of parametric design".

Other recent design trophies include Parley for the Oceans' 3D printed ocean plastic trophies for The Fashion Awards and Yinka Ilori's and Es Devlin's pair of Brit Awards trophies.