New York studios A+I and Unionworks have completed a house near Long Island's Sagaponack Pond with two volumes connected by an enclosed bridge, allowing the site's native shrubbery to grow beneath.

Bridge House is the first ground-up residential project by A+I, or Architecture+Information, which typically works on office interiors.

The studio collaborated with Unionworks on the expansive private home, located near the Hamptons town of Bridgehampton and totals 12,000 square feet (1,115 square metres)

Responding to the property's fragile ecosystem, the architects decided to partially raise the house to safeguard against flooding and minimise the impact on the land.

"Because the lowest of the three volumes is elevated 12 feet (3.7 metres) above the ground plain, evoking a bridge, the home seems to float above a bio-swale with native grasses, shrubs and wildflowers created by LaGuardia Design," said the team.

"This strategic landscaping allows water during major storms and coastal flooding to pass underneath the structure without harm," they added

Each end of the "bridge" is supported by a grounded volume that contains part of the home's communal areas. The two ground structures are parallel, intersected by the bridge, bringing the total of connected volumes to three.

These buildings were constructed with slender grey bricks and clad in vertical wooden siding, a choice that the architects describe as "a significant departure from the typical Hamptons shingle style".

"[The property] needed to be unlike any other Hamptons home," said the architects.

On the ground floor, the exterior finishes alternate between the exposed grey bricks and floor-to-ceiling windows that slide open, extending the living space into the home's multiple terraces. 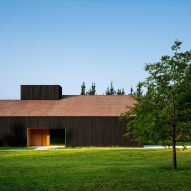 Caserío Azkarraga is a restaurant and residence wrapped in blackened timber

Stained wooden planks also clad its elevations and underside, which shelters a walkway between the two ends of the building.

The home's interior palette includes accents like bronze kitchen cabinets, which are intended to develop a patina over time.

White oak-paneled walls offers plenty of storage space, and a dramatic, suspended staircase creates a screening effect with the spacing of its slender metal supports.

The bridge structure contains five bedrooms, including the primary suite at one end, which opens out to a rooftop terrace. Downstairs, there are four additional bedrooms in one of the wings.

The Hamptons has long served as an escape from New York City, and this stretch of Long Island's southern shore is home to many impressive properties. Others to recently complete include Worrell Yeung's renovation of a 1970s house designed by Charles Gwathmey and a stone-clad residence with a pyramidal roof by Neil Logan.

The photography is by Magda Biernat.

More from The Hamptons