A stack of nine frosted glass "ice cubes" atop a pool of water houses this cultural centre in Xinxiang, China, designed by French studios Mathieu Forest Architecte and Zone Of Utopia.

The Xinxiang Cultural Tourism Centre was designed as a sculptural icon for a new winter sports tourism district in the city, which will in future include an indoor ski slope.

Inside the centre's nine cubes are a restaurant, cafe, shops, reading and children's spaces, with the stacked form used to create a series of open-air terraces that overlook the surrounding plaza and water pools.

"The ambition of the project is to create a strong urban indicator that unites the whole district," said Mathieu Forest Architecte and Zone of Utopia.

"[It] does not look like a classic building – it is not possible to figure out the number of floors, it is a sculpture out of scale, a pure and monumental volume," the studios continued.

The ice-like appearance was achieved through the use of printed glass panels, which are attached to the concrete structures with minimal metal fixings to avoid the need for any frames.

During the day, the appearance of the glass panels changes depending on the light conditions, revealing certain areas of the interior and concealing others.

At night, illumination from the interior creates a glowing effect, turning the centre into a "lighthouse" for the district.

"The texture of the glass facades is composed of a multitude of tangled translucent ice crystals that filter the light and the vision from the interior," said the studios.

"It is a question of hiding, whilst showing, to provoke mystery and the desire to approach." 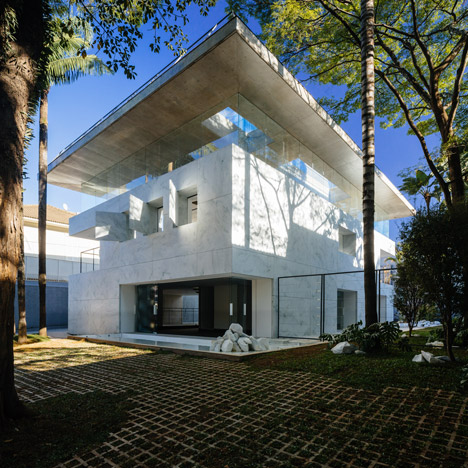 Each cube is stacked at a different angle, creating a variety of compositions depending on the direction of approach. Some cubes cantilever above the plaza and others are positioned to create small gaps to walk between.

In the central cluster of cubes, a double-height ground floor creates a large, open foyer, leading through to a reading room that opens onto a paved water terrace.

While this foyer merges the cubes into a single space at the ground floor level, their upper levels intersect and project out into it, creating balcony spaces supported by large white columns.

Two cubes sit away from the central area, connected via paved paths that cross the water pool and containing a shop and restaurant.

The Beijing 2022 Winter Olympics has led to a booming interest in winter sports in China. See the buildings that were used to host the games in Dezeen's guide to the Winter Olympics' architecture.

The photography is by ArchExist.