News that the brutalist town centre of Cumbernauld, Scotland, is set to be demolished and replaced as part of a council-led regeneration project has led to criticism.

North Lanarkshire Council announced the fact that the 1960s concrete megastructure, named The Centre Cumbernauld, is set to be demolished last week.

The decision was described as "cowardly and wasteful" by critics who said there was a "strong case for listing".

"Enormously important as an urban experiment"

The ageing multi-storey building contains offices, a hotel and shops, alongside parking and various other community facilities.

After agreeing to purchase the structure from its private owners, North Lanarkshire Council intends to build a mix of education, office and leisure facilities in its place, alongside new shops and homes.

Architectural historian Barnabas Calder described the decision as "cowardly and wasteful", calling for the centre to be renovated instead.

"It's had a hard life, but it's enormously important as an urban experiment," Calder wrote on Twitter. "Retrofitting imaginatively and well is the right thing for carbon and heritage".

"Huge step forward in the regeneration of the town"

His thoughts were echoed by Design Museum curator Justin McGuirk, who said the council's decision contradicted its declaration of a climate emergency in 2019.

"This council declared a climate emergency in 2019," he said. "Why make these declarations if you won't live by them?"

However, the leader of North Lanarkshire Council Jim Logue said that the purchase represents "a huge step forward in the regeneration of the town".

"While the building represented the future in the 1960s, it is clear that it does not fit with residents' vision of what they need from a modern town centre," Logue said.

"Of course it isn't perfect but this is one of those decisions that's going to look stupid and incomprehensible in decades to come," he wrote on Twitter. 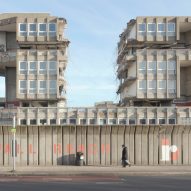 Arch Record editor Tim Abrahams added that the move followed the "steady and deliberately managed decline" of the town centre.

"North Lanarkshire Council have cared for the centre so badly that it's questionable whether they have the competence to manage its replacement," he said.

"There's a strong case for listing"

However, according to historian Otto Saumarez Smith, there is still an opportunity to save the development.

"There's a strong case for listing on the base international significance," he wrote on Twitter.

"It needs TLC after decades of ill-use, but is unique and listing would help developers find a solution that respected that."

Brutalist architecture is characterised by bold monolithic forms cast from exposed concrete, making it one of the 20th century's most controversial architectural styles.

There has been widespread demolition of these buildings in recent years, such as the Robin Hood Gardens housing estate by British architects Peter and Alison Smithson. Elsewhere, the Derby Assembly Rooms by Casson, Conder & Partners is set to be demolished while and Swansea Civic Centre by CW Quick is also under threat.

In an interview with Dezeen, director of the Twentieth Century Society Catherine Croft said the purge of these buildings can often be blamed on developers who do not recognise their architectural significance.

"In most cases, brutalist buildings are demolished because developers think they can put something bigger and more lucrative on the site," she explained. "The nature of the building on the site is really of not much relevance to them."

The photography is by Ed Webster via Wikimedia Commons.