The rebranded hotel recently opened following a thorough refurbishment, which included the addition of new oriel windows on the building's facade.

The hotel was designed by Lore Group creative director Jacu Strauss, who aimed to build on the foundation of the Ace Hotel London Shoreditch.

Designed by London-based Universal Design Studio, the Ace Hotel opened in 2013, but was shuttered in 2020 amid the coronavirus pandemic and never reopened.

"People were sentimental about what it was before and while we never wanted to drastically change that, we wanted to reflect the new, more grown-up Shoreditch," Strauss told Dezeen.

"And we hope that the energy that people loved in the former property is even more present now."

One Hundred Shoreditch has 258 rooms as well as three bars, a coffee shop and a restaurant named Goddard & Gibbs, which has a giant yellow rock sculpture as its centrepiece.

In the revamped lobby area, timber totem sculptures designed by Strauss and crafted by London-based Jan Hendzel Studio have been put in place, as well as a giant mirror.

In the interest of reducing waste, Lore Group said it tried to keep materials from the old hotel where possible.

The wooden floor in the entrance area remains the same, while a long wooden table has been refinished to give it a lighter tone, with the corners sanded into curves. 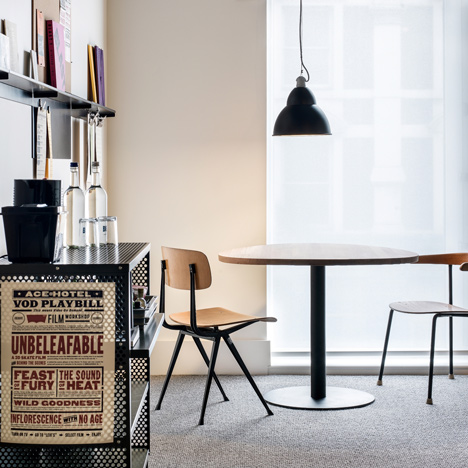 Cork wall panelling has been dotted throughout, while the existing cork ceiling was replaced with an acoustically insulated combination of timber strips backed by black felt to soften the disco music prescribed by Strauss.

An arrangement of giant scarlet paper flowers behind the counter distinguishes the lobby bar.

On the basement level, what was previously a nightclub has been replaced by a lounge-style cocktail bar named Seed Library.

The bar's design was informed by the films of director Stanley Kubrick with table lamps reminiscent of 1960s science fiction, juxtaposed with playful flourishes such as wooden wall panels fixed using metal racks taken from an office shelving unit.

In the rooftop bar, powdery pink tiles matched with vivid pink terrazzo tabletops are intended to catch the sunlight, while green plants hang down from the ceiling in a concealed planter.

Also on the top level is a multipurpose events space where a colourful second-hand parachute has been attached to the wall.

Strauss sought to add intrigue to other communal spaces with artworks, including pieces painted in-situ personally by him inside the lifts and tapestries in the corridors.

The rooms were designed to have a more laid back atmosphere with a mainly neutral palette.

"When you enter the bedrooms you need to shift your energy," explained Strauss. "The room should be a sanctuary – this is the place where you need calm."

In the bedrooms Berber carpets have been combined with a bed designed by Strauss with a shrunken base to create the illusion of floating.

Large artworks adorn the walls to provide colour, with playful slinky-like vases are filled with eucalyptus to scent the rooms.

Lore Group also operates Sea Containers, a hotel on London's Southbank, as well as the Pulitzer in Amsterdam and the Riggs and Lyle hotels, both in Washington DC.

Strauss led on the interiors for Sea Containers while a senior director at Tom Dixon's Design Research Studio.

The images are courtesy of Lore Group.