Burkinabè architect Diébédo Francis Kéré, who was named the winner of the 2022 Pritzker Architecture Prize yesterday, describes his philosophy in this video.

"Architecture is primarily a service to humanity, to create an environment where a human being can develop itself, can be happy, can have what I call wellbeing," he explained in the video.

Kéré, who was born in Burkina Faso and is based in Berlin, was the first African and the first Black architect to win the prestigious Pritzker Architecture Prize since it launched in 1979.

He is known for designing numerous schools and medical centres in Burkina Faso and across Africa and has designed the parliament building for Benin. He aims to create buildings that are high-quality and inspire people.

"My philosophy is to say that everyone deserves luxury in terms of quality," said Kéré.

"So the poorest, but also the rich. I want my building to inspire the user. To make the user happy."

In the video, Kéré explained how his buildings are designed to be appropriate to their environment.

"I think it's fundamental to think about what is existing in the given place where you're going to build, and then check, what is my contribution as an architect?" he said.

"How can I do things differently to change that situation? That is not the best at all. If you build in the hot climate region, which is what I'm doing," Kéré continued.

"First, you think about how to get a building to work without an artificial cooling system? Look around what is an alternative?"

Each of his projects were designed to focus on the people using them, he explained. 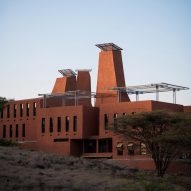 "It is always about people, it is about people with low income, but also for the people earning a lot," he said.

"They are looking around for inspiration and innovation. And that is what we have to look for."

Overall, Kéré hopes that his projects will inspire people "to dream of better".

"I want my buildings to inspire the user to make the user happy. I want them to start to dream of better," he said.

The photography is courtesy of Kéré Architecture, unless stated.