Located on the banks of Lake Turkana, the 1,416-square-metre campus was built for non-profit organisation Learning Lions to offer young Kenyans free training in information and communication technologies (ICT).

It is hoped to help alleviate youth unemployment in the region and allow young people to "thrive professionally without having to leave their homeland," according to Kéré Architecture.

Kéré Architecture's design for the Startup Lions Campus "celebrates the unique morphology" of the site, comprising five linked buildings spanning two levels that follow the natural slope of the terrain.

It is built from locally sourced quarry stone finished with a terracotta-hued concrete plaster. This technique was chosen as it is low cost and so that the skills of the local community could be utilised in its construction.

From afar, the campus is distinguished by three tall ventilation towers that the studio modelled on the tall mounds built by termite colonies found throughout the region.

Each tower helps cool the building's interiors by extracting warm air upwards, as fresh air is brought in through adjustable low-level openings with woven straw shades. This technique is called the stack effect.

Inside, the building contains a mix of classrooms, flexible workshops and co-working spaces, alongside storage, administrative and technical facilities.

It is complete with a series of roof terraces that offer views over Lake Turkana, and will eventually be shaded by planted pergolas to offer cool and comfortable outdoor teaching and meeting spaces. 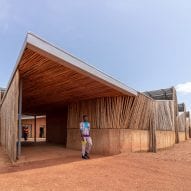 "From the very beginning the project has had collaborative building and learning at its heart," Kéré said.

"We had imagined an educational facility that blended with the striking natural landscape that surrounds it, mirroring the ingenious structures built by the terminates close by," he continued.

"It is a special honour for me and my team to have been able to provide the shape for this incredible educational facility and I am looking forward to how it may expand and most importantly see its students succeed."

Kéré Architecture was founded by Kéré in Berlin in 2005. The studio also recently completed the Burkina Institute of Technology, which was constructed using local clay.

Elsewhere, the office is designing Benin's parliament, which is modelled on the African palaver tree, and Burkina Faso's new parliament building, which Kéré said "responds to needs of the people".

Photography is courtesy of Kéré Architecture.