References to Dutch culture and history are woven throughout the VIP centre of Amsterdam's Schiphol airport, which has undergone a maximalist revamp by designer Marcel Wanders.

The airport lounge comprises a sequence of rooms including a library, drinks bar and smoking room, all designed by Marcel Wanders and his studio to have a distinct theme.

"We wanted each room to be able to exist on its own," explained Gabriele Chiave, the studio's creative director.

"Of course, the main thread throughout is Dutch heritage and culture," he continued. "But we decided on main themes like art and innovation that inspired generations of designers."

"This travellers' lounge offered an opportunity to share Dutch culture with the world," Wanders added. "It introduces people to our history and our masterpieces."

As travellers enter the VIP centre, they come into a relaxed lounge area designed to loosely resemble the national Rijksmuseum in Amsterdam.

Displayed on the walls are replicas of paintings by different Dutch masters, set against backlit glass walls that were installed a decade ago during the last renovation of the lounge by local practice Concrete Architects.

Across the room are banks of coffee-coloured sofas, which like the rest of the furnishings throughout the centre were selected in collaboration with Dutch design brand Lensvelt.

More reproductions of significant Dutch artworks are found in the centre's workroom, where travellers can sit down with their laptops or take private phone calls.

Here, a trompe l'oeil effect on the walls creates the impression that the room is finished with traditional boiserie, half-varnished in a rich yellow ochre hue. 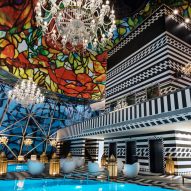 Guests can also retreat to the VIP centre's Delft Blue Salon, which takes its name from a style of Dutch tin-glazed pottery that's typically adorned with intricate blue-and-white designs.

Living up to its name, the room was fitted with patterned blue wallpaper panels and dotted with a few Delft Blue vases.

Elsewhere in the VIP centre, there's a smoking room that nods to the Netherlands' historical ties to the tobacco trade and a seating area designed to reference Amsterdam's canal houses, with a streetlamp-style light and fake stained-glass windows.

Other amenities include a library, drinks bar, games room and a serene sleeping room.

Wanders is known for his striking maximalist aesthetic, which can also be seen in his interior design for Doha's Mandarin hotel with its mismatched patterns and oversized furnishings.

Stateside, the designer has previously created a diamond-patterned facade for the Louis Vuitton store in Miami, referencing the brand's iconic monogram logo.