Columns adorned with golden eggs, intricate mosaic walls and giant bell-shaped lights are some of the eccentric features that Marcel Wanders has designed for the interiors of Doha's Mondrian hotel.

The Dutch product and interior designer was brought on board to create a "fantasy-like environment" for the Mondrian Doha, a five-star hotel designed by local firm South West Architecture for the hospitality company SBE.

Located in the city's West Bay Lagoon neighbourhood, the hotel plays host to 270 rooms, eight restaurants and bars, and a 2,000 square-metre ballroom.

Wanders began by closely studying traditional Arabic patterns and the imagery depicted in One Thousand and One Nights, a collection of centuries-old folk stories from the Middle East. He then translated these into various decor features.

"For the design of Mondrian Doha and everything we do, locale is super important. To create the hotel, we studied the city and we studied the people," said Wanders.

"Conceptually, we have married local culture with a modern design aesthetic. While many themes are collectively layered throughout the hotel, each individual space tells its own tale."

White pillars in the building's entrance lobby are dotted with gold egg-like forms, while lighting is provided by chandeliers encased within large metallic bells.

A nearby lounge features photorealistic floral rugs from Wanders' furniture brand Moooi, which have been placed between pale "tree of life" sculptures.

The atrium is dominated by a black helical staircase that extends up over four floors, leading guests to a viewing platform. Its balustrades feature an ornate cut-out pattern, while the soffit is slightly curved like the underside of a slide.

Giant lamps illuminate the room's seating areas, which have been largely finished with beige-hued soft furnishings that echo the colour palette of Qatar's deserts.

Several other spaces in the hotel are characterised by Wanders' use of clashing prints. On the 27th floor, which is home to a large swimming pool, a floral-patterned stained-glass dome is contrasted against chequerboard flooring and a monochromatic lift shaft.

The Mondrian Doha opened in October of this year, and marks the first hotel that Wanders has completed in the Middle East.

Recognised for his maximalist aesthetic, the designer has previously created chocolate-inspired interiors for a hotel in Zurich, and filled guest accommodation in Amsterdam with objects that reference the Dutch Golden Age.

For job opportunities at Marcel Wanders, visit their company profile on Dezeen Jobs. 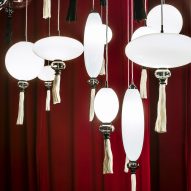