Students in grade three and four at New York's Trinity School have created a collection of wooden chairs that express their individual personalities, in a module run by art educator Bruce Edelstein.

Each year, Edelstein gives the seven- to ten-year-olds a simple brief: to build a chair for themselves that is unique to them, using only pinewood planks. Previous examples made by Edelstein's students include chairs with horns and an alligator chair.

Across a series of weekly hour-long sessions, he leads them in a process that involves ideation, sketching, building scale models from paper, cutting and nailing wood, and then decorating their designs.

The chairs produced by the Trinity School children in the autumn 2021 semester include ones that look like fantastical beasts, chairs that take an abstract approach to form and several that make creative use of masking tape.

Edelstein, a trained sculptor, has been running the workshop for more than 18 years, and it has taken on a legendary status among the students, some of who still have their handiwork at home when they graduate.

In a break from tradition, this cohort of students includes both the usual grade three students plus students from grade four, whose classes had been disrupted by the coronavirus pandemic a year earlier.

During this period, Edelstein adapted the workshop for online learning, having the children do the whole design process up to the woodworking stage from home and adding an additional exercise where they would create an environment for the chair within a shoebox.

"We started by talking about the same ideas, of looking around you seeing that someone created all these things, whether it's a faucet in your bathroom or a light fixture, that the whole idea of design is something we live in all the time, that they can participate in," Edelstein told Dezeen.

"I didn't get as involved with the question of could you actually make it," he continued. "When we're making it in wood, there are certain things you have to learn about how to connect the wood, whether it's glueing and nailing, or using triangles to reinforce things like the leg against the seat."

Because the students were keen to give their designs physical form once in-person learning returned, Edelstein had them join the following year's class for the woodworking component.

The combined cohort's designs include chairs that look like a cyclops, a dragon, a swan and an outer-space chair. Others take a less literal approach.

One chair, with one plank that reaches and bends high into the air, was inspired by ballet. Two students had initially wanted to do the same ballet theme, and Edelstein encouraged them to differentiate their designs.

"I said, ballet is a wonderful idea, but what is it about ballet that you love?" he explained.

"Can you take some of the ideas or the shapes that you would think of that are important to you and use them? Is it possible to think of it a little more abstractly?" 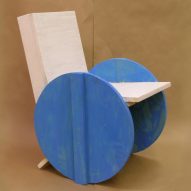 "And she said, well, this is how I would stand in ballet – and she put her arm up like that," he added. "And I said, well, can we do that with wood?"

The chair ended up being an abstract interpretation of the movements and postures of ballet, with one triangle-shaped leg symbolising the bent leg of a plié.

A number of the children explored hybrid forms in their designs, combining their seating with shelves, desks or hooks to hang things on, often inspired by their own interests, such as the idea of having a dedicated spot for drawing.

One chair, with a small arched entryway cut into the base, was intended as a place where a child could hide. The aforementioned cyclops chair has a shelf that is also a mouth full of pointed teeth, so it is both highly functional and creates a visual gag when people place their hands in it.

Some of the designs are more simple in form and come alive in the decoration, such as a shelf-bench painted in flat planes of blue, pink and – underneath – yellow.

"When she added the colour I fell in love with it," said Edelstein. "Because when you see it in real life, it glows from the bottom of it. You say, 'is there a light down there?' It reminds me of a Dan Flavin sculpture. It's quite contemporary."

When it comes to decoration, Edelstein briefly showed the children a variety of techniques such as staining, but he said that often they already had clear ideas of what they wanted to achieve with the decoration.

"If they have an idea about how to do something, and they have the confidence, you see them really experiment with materials to bring out the best in something," he said. "They'll try to get what they're really interested in getting, even at this age."

Edelstein thinks it's the idiosyncrasy of the chairs that makes them so memorable, and sees a lesson in the children's approach for grown-up designers.

"Allowing personal nuances to come out in your work is really important," he said. "And that's what you see with these kids. They're very much in touch with their feelings at this point in their lives."

Other recent student projects include six furniture designs by Beckmans College of Design in Stockholm and a chair made from Transylvanian mushroom leather.