Diversity in Design, a collaborative group of designers and brands working to increase racial diversity in the field, has launched the first in a series of educational fairs.

The Designed By fair opened on 18 March 2022 in Detroit, and was created to address the lack of representation in design. According to MillerKnoll, which founded DID, less than five per cent of the industry is made up of people identifying as Black.

Diversity in Design (DID) was founded as an outcome of discussions on racial diversity in design after the George Floyd protests in 2020. Detroit was chosen as the inaugural city for the fair because of its majority Black population, as well as MillerKnoll's roots in Michigan.

The programming, headlined by "hip-hop architect" Michael Ford, offered students the chance to speak with practicing architects and designers.

DID invited over 200 students in grades 9-12 the opportunity to meet and listen to prominent Black members of the field such as Estelle Bailey-Babenzian and Christion Banks. The talk by Banks, the CSO of Ronin, was moderated by Neala Muniz, a 15-year-old member of the Detroit Institute of Arts Teen Council.

In the time since the founding of DID, the many collaborators – including Adobe, Dropbox, and a number of architecture and design firms – have been working on creating a sense of urgency and accessibility.

DID director Todd Palmer envisioned the fair as a way for students to connect with a field that many might see as elite or unreachable.

"You're in a school with broken windows and you're thinking architecture 'what does it have to do with me here?It's gleaming buildings downtown. It doesn't relate to my life'," he told Dezeen on the motivations for the event.

Based on the usual trajectory of designers, Palmer believes that there are missed connections for Black designers in high school and in college, and the aim of Design By is to try and show students what's possible.

Meeting students where they are at

Palmer, who started his career as a high school teacher, understands the importance of strategy when it comes to early education initiatives, basing his approach on the obstacles he had to overcome.

With changing generational interests in mind, the fair's booths and speakers looked beyond the traditional horizons of architecture and design. The programming in Detroit included product design, UX, urban design, and graphic design in addition to the more traditional focuses.

"Listening and holding back and realising that different generations come with their own sense of genius and their own sense of priority, and really meeting those young people where they are has been important," Palmer told Dezeen.

Instead of following the traditional job fair model, Palmer organised the day around themes, so that students could be as inspired as possible by fields close to their own interests.

The programming of By Design works to address what Palmer refers to as the "informal structures". These include obstacles to skill-building and networking that are additional to the already present disparities in higher education for people of colour.

Though aspects of disadvantage locally and globally are top of mind of Palmer, he insists that "it's really important not to think in a deficit model while we recognise the disparities". Instead, recognising potential and trying to bring local initiatives to scale while still focusing on the specifics of the local is important to the fair, and the practices of DID in general. 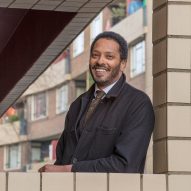 "One of the great parts of design thinking is as you do it, you pilot at a scale, you learn, you iterate, and then you begin to grow," he said, "And we're taking the centre very intentional, iterative approach to all the actions".

Designed By Detroit was the first of many initiatives soon to be implemented in order to further address the disparity of racial representation in the fields of architecture and design.

To read more about Black designers currently working in the field, see Dezeen's round-up of 14 Black architects and designers you should know.

The cover image is of Todd Palmer. Images courtesy of Diversity in Design.