Set to debut at tomorrow's women's team match, the pre-match shirt will be worn by players before games at home for the rest of the 2021/22 FA Women's Super League season. The men's team will wear the shirt once ahead of their Premier League match at Crystal Palace on 4 April.

The pre-match shirts form part of a 10-piece clothing collection for Arsenal that includes hoodies and leggings for women in an eye-catching animal print.

It is the first time since McCartney began working with Adidas in 2005 that she has designed a kit for a women's football team.

"As the most decorated English women's football club, Arsenal Women is made up of incredible athletes, so to be able to celebrate them – especially in a year that is so pivotal for women in sport – is incredibly special," said McCartney.

"We're so excited to continue our journey into the world of football by creating our first travel wear collection for a team."

Across the collection, the distinctive "mystery blue" and "scarlet red" colours of the Arsenal club can be seen in a large leopard print pattern – a pattern historically associated with female prowess and a staple pattern in McCartney's oeuvre.

McCartney, who also created the outfits for the GB team at the 2016 Olympic Games in Rio de Janeiro, hopes that the colours and print tie the fashion and football industries together.

"I love that we have fused statement leopard print – an iconic Adidas by Stella McCartney graphic – with distinctive colours to truly bring the two worlds of fashion and football together in an authentic way," added McCarney.

"We hope this collection inspires both current and the future generations of athletes as they make their mark on and off the pitch," she said. 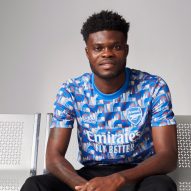 The shirts were made from a mix of organic cotton and recycled materials.

Alongside the sports apparel, McCartney has redesigned Adidas' female football boot, the Ultraboost 22 in an exclusive colourway.

The kits continue McCartney's move into the world of football, following the release of its Predator Freak vegan football boot last year.

The range will be available in a limited quantity from 28 March 2022.

Previous collaborations between Adidas and McCartney include a tennis dress made with a lab-grown vegan spidery silk that can "fully biodegrade" and an updated version of the Ultra Boost trainer that features an upper made with sea-bound Parley Ocean Plastic.