The designers and artists of colour were selected for demonstrating extraordinary achievements in their respective fields.

Those based in New York include Kyle Abraham, dance; Yemi Amu, agriculture; and Salome Asega, art, technology and design. Architect Germane Barnes is from Miami, and visual artist Kenturah Davis is from Los Angeles.

London fashion designer Tolu Coker and Niamey architect Mariam Issoufou Kamara round out the cohort of creatives, who will each receive financial support to work on new or continuing projects.

After gathering as a group in Chicago last month, they will be given further opportunities to foster relationships with one another, as well as with global organisations and design leaders. 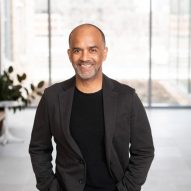 "For too long, there has been an evident pipeline and visibility barrier for designers of colour working across the creative industries, and the Dorchester Industries Experimental Design Lab not only challenges the notion that Black talent is hard to identify, but also serves as an inescapable answer to it," said Gates, who is co-chair of Prada Group's Diversity and Inclusion Advisory Council.

"I'm so proud of this cohort, and it is a tremendous honour to be able to celebrate, support, and amplify the work of these designers working to enrich our collective understanding of and interactions with design," he added.

Gates has worked extensively on regeneration and community arts projects in Chicago's South Side, his home neighbourhood, which has a predominately Black population.

These include the transformation of a derelict bank into a public arts centre, where the artist formally presented the cohort today, 5 April 2022, during a public conversation. He also founded Dorchester Industries as an artist-led manufacturing platform in the city.

Gates was named as the designer for this year's Serpentine Gallery Pavilion in London, and recently revealed his proposal for the commission, the Black Chapel.

Dorchester Industries Experimental Design Lab is one of several initiatives set up over the past two years to promote and foster the development of Black designers, following the impactful rise of the Black Lives Matter movement in 2020.

Others include the Diversity in Design collaborative, which held its inaugural youth design fair in Detroit last month, and First 500, an online platform dedicated to showcasing the work of Black women architects working in the US.

The photography is by Chris Strong, courtesy of Rebuild Foundation.