Interior designer Katerina Kovalenko was forced to flee Ukraine in the early hours of the morning as Russian forces invaded. Here, she shares her story of returning to Milan, a city she once called home, as a refugee.

On 24 February, I was woken up at 6am by a call from a friend: "The war has started. Get up." A couple of days before, I had come from Kyiv to my hometown in central Ukraine to spend time with my mother for her birthday. So that morning, I met war in the city where I was born.

That whole first week, I was determined to stay in Ukraine. I was with my mum and I didn't want to leave her and she didn't want to leave the house. We kept thinking that it would be over soon. And it seemed impossible to find transportation. Everyone was panicking. The trains were so full that people couldn't even go to the restroom, so they were wearing diapers on these 12 to 18-hour trips.

I had several projects in Kyiv at the time – apartments, houses, showrooms – but of course, all payments from clients fell through. No one was thinking about the fact that they needed to pay their interior designer when the building could be bombed at any second. So in one moment, I lost all my work, all my projects, all my payments.

But ultimately, the situation felt too serious and too dangerous for us to stay. We decided to leave the following Sunday at four in the morning. It was still dark outside and I was terrified as we were sneaking to the car. We were breaking the curfew, so soldiers could shoot us on sight without even needing to ask why we were outside.

Soldiers could shoot us on sight

Danger was everywhere. But food, water and fuel were nowhere. The second day of our journey was spent entirely in the queue to get gas. In each city we entered, we were welcomed by air raid sirens. They followed us all the way to the border.

When you live in the middle of war, your brain quickly adapts. The first day is shocking. But you forget about this feeling because you need to survive. Every new siren is less scary and after the 15th, they already feel like the soundtrack to your daily life.

There was no time for getting emotional during the journey. I felt like I'd had an adrenaline shot straight to my brain, so I was hyper-aware of the present moment and ready for an attack at any second.

My mum and I finally crossed the border to Romania during the first hours of International Women’s Day. Volunteers welcomed us with flowers, food, blankets and kind support. Everyone cried. The next morning I woke up in the office of the mayor, which had been converted into a makeshift refugee camp.

That same day, the volunteers helped us find a bus to Milan. In Italy, people often have two homes, a prima casa and a seconda casa. And to me, Milan is like my seconda casa – my second home. I first moved there in 2017 to work for the furniture brand Molteni&C.

It took five years to build a life in Milan and I tried so hard to make it work. But I ended up emigrating back to Kyiv last December, only two months before the start of the war.

It felt like a cruel stroke of irony to be returning to Italy as a refugee, staying in a Red Cross camp in one of Milan's northern suburbs. There, we had to quarantine for five days while waiting for the doctors to put together our medical documents. All the while, I was still in survival mode. 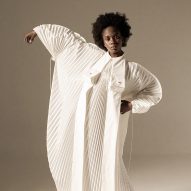 My mum and I were staying in a room together with 20 other women and their children, sharing bunk beds under the cold neon light. There was never a moment of silence. The babies were constantly crying and no matter what I did, I couldn't sleep. I was exhausted and depressed. I just felt abandoned by life.

Because I know Italian, I volunteered to translate for the other refugees and initiated language courses for them. But once my mum and I were out of quarantine, we were relocated to a different camp. They put us in a taxi with our bags and no idea where we were going. I had heard rumours that there were smaller rooms in the more permanent camps, so I was hopeful.

I had to stop translating because I was crying so hard

Finally, the cab pulled up in front of a seven-storey building that turned to be a religious shelter for women and children fleeing violence – lots of Jesus statues and prayers written on the walls.

I was the only one out of all the refugees who spoke Italian, so I was translating for everyone when the director told us that we would be staying together in groups of 20. I had to stop translating because I was crying so hard. But they just said: "At least you're alive. You escaped from the war, what more do you want?"

I know it's wrong to say that the conditions were horrible. But I think it's easier for people who don't have any expectations. My mum was kind of happy there because she didn't travel much before the war and she was just glad to have food and a place to sleep. But I had been living my normal life in Milan only a couple of months ago and now I was in this camp.

At first, it felt good to finally be safe and to stay somewhere for more than one night. But after a week, all I wanted was to go back to my routine, to sleep in a room without screaming children that aren't mine. Between 20 of us, there was only one bathroom including one shower, one toilet and no lock on the door. It was impossible to be alone.

But the most horrible part for me was that we weren't allowed to stay outside in the evenings, which robbed me of every sense of normality. We had to sign our names on a list every day at 10pm to prove that we were present. And every night, a man came into the room and pointed a torch in our faces to check that we were there.

It was like a prison. I could tell that I was losing myself and my motivation because I was so focused on pure survival.

But thankfully, I managed to connect with an architect living in Milan, who offered to let us stay in his apartment for as long as we needed. That's where I've been living for the last two weeks. But my mum is still at the camp so she can continue to get help from the government, three meals and €2.50 of pocket money per day.

I need a tax code, a registered address and a residence permit so that I can be employed in Italy. But I feel like the government has made the process of getting the documents as long and convoluted as possible. I've submitted the request but I have no idea when I will hear back – a month, two months, three months from now? It's like they're waiting for the war to be over so they don't have to give out too many permits.

Right now, I'm living off of savings and help from friends. I don't really have a plan, I just have dreams. It's so hard to think ahead in a situation like this. But I already started from zero once, so I know I can do it again and again.

My mum and I are dreaming of returning to Ukraine eventually. I'm afraid of how it will feel to see everything destroyed. It's already hard enough watching videos of Kyiv, in which the streets and shops I used to pass are reduced to rubble.

But at the same time, it makes me proud to be a designer because we will be the ones to rebuild the city. I've already received emails from foreign architects and engineers offering to help, and I hope to be part of a community of people to reconstruct our country when the war is over.

Katerina Kovalenko is an interior designer and founder of studio 725. Her writing has appeared in the Ukrainian editions of Harper's Bazaar and Cosmopolitan as well as L'Officiel Monaco.