Looking to contrast the area's traditional stone country homes, the Paris-based studio drew on the lightweight Case Study Houses built in California in the 1960s to create a simple structure that sits lightly in its surroundings.

"The Wooden House scrupulously chooses its land, its exposure, its height and its references to revisit the archetype of the country house," said the studio.

"[It is] a place in which you live carefree and unconfined, in direct contact with the landscape, surrounded by bare necessities," it continued.

The almost-square central form of the home, clad in black timber planks, sits atop an area of raised wooden decking. The deck wraps the southern edge to create a variety of seating areas surrounded by a black timber balustrade.

A roof has a large overhang and is supported by thin steel supports. It shelters a south-facing section of full-height glazing, which provides the L-shaped living, dining and kitchen area with dramatic views across the landscape.

Two bedrooms, a bathroom and a study space create a more private L-shaped section of the home, which north and east with small windows framing views.

A stepped roof line creates higher ceilings at the front of the home, while the bedrooms at the rear are slightly more intimate-feeling spaces. 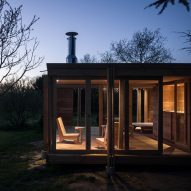 In the study, a small mezzanine level sits atop a wooden frame accessed by a ladder, leading to an elevated space with a small window.

"Benefiting from large window openings, [the home] is flooded with light and lives to the rhythm of the seasons according to its bioclimatic principles," said the studio.

Internally, the walls and ceilings have been given a crisp white finish. Simple furnishings, window frames and fittings were made using wood sourced from the local area.

Much of the framework and structure is left exposed, with a grid of black timber battens supporting corrugated plastic forming the roof. The junctions between the foundations and house are also left visible.

"Floating lightly above its field, the house imprints its unique Neo-vernacular spirit on the landscape, having chosen wood from the surrounding forests that have gradually replaced the regions agricultural land," said the studio.

Previous projects by Ciguë include several retail interiors including a store in Nottingham for skincare brand Aesop organised around distillation apparatus and a store in Bangkok for fashion brand Isabel Marant with woven bamboo screens.

The photography is by Maris Mezulis.