London studio Simon Gill Architects has extended and renovated a Victorian lodge in Fulham cemetery to create a house with a subterranean pool, courtyard gardens and lightwells.

Aptly named The Lodge, the luxury residence was created for an army veteran who had once lived opposite the cemetery and wanted to use the existing building to create an atypical home.

The lodge, known officially as the Fulham Cemetery Lodge, was built in 1865 alongside a chapel, gatehouse and public toilets and had fallen into disrepair.

When the opportunity to refurbish the structure presented itself, the owner "leapt at the chance to purchase it and turn it into an unusual home", Simon Gill Architects explained.

"The original urban composition has been repaired and enhanced, developing an architectural language that allows old and new to give meaning to each other," reflected the studio.

"The retained lodge, now dramatically refurbished and extended, juxtaposes a house for the living beside a home for the dead."

A key driver behind Simon Gill Architects' design was to ensure the new elements of The Lodge were subordinate to the building's original Victorian architecture.

The extension is largely positioned underground, reading as a single-storey structure from the outside, and features stone cladding that ties in with the original materiality.

However, positioning the extension underground came with its challenges.

"We had to contend with the sensitivity of the site on the edge of a cemetery, and excavations of course had to be undertaken extremely carefully to avoid disturbing any remains or any damage to the lodge," the studio's founder Simon Gill told Dezeen.

Another key goal of Simon Gill Architects' design was to maximise natural light without compromising the owner's privacy on the site, which is overlooked by a busy road and the cemetery.

To achieve this, its floor plan is positioned in between courtyards and primarily illuminated by lightwells, meaning its back is turned to onlookers.

Externally, The Lodge house extension is clad in Bath stone, a type of limestone chosen to visually match the rough Purbeck stone facades of the original building.

"The starting point was the robust stone materiality of the Victorian Lodge building," Gill explained.

Other elements of the original building are also referenced throughout the new structure, including pointed arches that are referenced in the form of the skylights.

Inside, the home's bedrooms and bathrooms are contained within the original lodge building while the shared living areas are positioned within the extension. 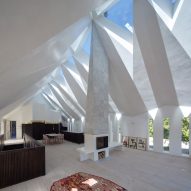 There is also a subterranean swimming pool finished with dark materials and dramatic lighting from a large lightwell overhead.

Other unexpected elements of the design include a secret door and a "ghost window" that appears in the stairwell when that sunlight seeps through one of the roof lights.

Old and new elements of the home are visually linked by "a series of carefully arranged enfilades", such as one from the dining room that looks out to the lodge's original hallway and front door.

The interior finishes, which are intended to be visually simple yet complementary to the exterior, also help unify the spaces.

To avoid the use of "swathes of white plasterboard" inside, the studio made use of exposed brick walls, smooth new stonework and timber panelling.

"We wanted to achieve a coherent interior that would work with the architecture of both the original lodge and its extension," Gill explained.

"The interior design is relatively simple, in order to allow the internal spaces to flow easily into each other."

The dwelling is complete with an extensive landscape design that varies throughout the scheme.

This includes a formal courtyard garden with a moat, as well as an informal side garden and wildflower roof.

"I'm pleased that we left what was originally a brownfield site with more greenery than it had before, and new habitats alongside those within the cemetery," Gill concluded.

Another house overlooking a cemetery in London is House on Swain's Lane. Designed by Eldridge Smerin, the home features a glazed facade that looks out to Highgate Cemetery. It uses the footprint of a building by architect John Winter that previously occupied the site.