Double-height volumes in this gabled house in Porto accommodate mezzanine levels and light-filled living spaces that look onto a courtyard.

Named House in Rua Direita de Francos, the residence was designed by local architecture studios WeStudio and Made for a family who wanted to live near the Portuguese city's centre.

The single-storey house replaces an existing stone dwelling on the 341-square-metre plot, which had been orientated to face the Rua Direita de Francos – the street from which it takes its name.

WeStudio and Made chose to preserve some of the original building's stone walls but designed the replacement house so that its living areas look onto the private garden instead.

The L-shaped building comprises two wings arranged around the enclosed garden, with its bedrooms facing east and an open-plan kitchen, dining and lounge area facing south.

It follows the line of the existing stone wall facing the street but its gabled roof projects up above it, maintaining a consistent height along its length.

WeStudio and Made took advantage of the height provided by the pitched roof to incorporate additional living spaces along with clerestory windows and skylights that brighten the interior.

"The single floor arrangement with a gable roof allowed opportunities to explore flexible areas as mezzanines, attached to the main rooms but at a higher level," the studios explained.

"These can be used to study or play," added the architects. "The relationships between spaces, sizes and dimensions were co-designed in conversation with the family."

A cranked staircase ascends from the kitchen and dining area to a study on a mezzanine, which has been slotted in above the garage. 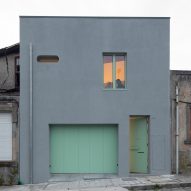 The study has metal mesh balustrades that ensure daylight entering through a skylight above can filter down to the lower level.

Mezzanines also feature in the bedrooms, where they are positioned above storage cupboards or en-suite bathrooms and accessed by ladders.

Externally, brown brick cladding applied across all of the House in Rua Direita de Franco's elevations extends onto the roof, giving the building a monolithic appearance.

Different brickwork patterns on the garden-facing elevation create a datum that is continued internally in the material finishes used to separate the main rooms from the mezzanine levels.

Openings throughout the House in Rua Direita de Francos are carefully positioned to optimise natural light and outward views. These include full-height glazed walls, light tunnels and skylights that serve more than one space.

"The light openings were designed taking into account the type of space and its orientation," the studios said. "The light is an unexpected play to the rooms with variations throughout the day."

The photography is by José Campos.