American firm CookFox Architects has completed a pair of tall, connected buildings with gridded facades for a Williamsburg site that once held an iconic sugar factory.

The towers, called One South First and Ten Grand, are located at the historic Domino Sugar Refinery, which opened in 1882 and was shut down in 2004.

In recent years, the former industrial property – which stands prominently in Brooklyn along the East River – has been converted into a mixed-use development. The site's original name has been retained.

Masterplanned by SHoP Architects in 2013, the redeveloped site features five buildings, each designed by a different architect.

New York's CookFox Architects created the 42-storey One South First and the 24-storey Ten Grand for a trapezoidal parcel on the north edge of the property. One South First holds residential units, while the other building contains office space.

The towers opened in 2019 but the firm has just now released photographs. The massing was guided by the Domino Sugar Refinery masterplan.

Rising up from a three-storey podium, the towers have a large gap between them. One South First, which climbs higher, has an arm that rests atop its shorter neighbour.

Facades consist of white, precast concrete panels that form a gridded pattern – a design that takes cues from the site's history.

"The contemporary facade design is inspired by sugar's crystalline structure, connecting the new building with the industrial history of the site," the team said.

The panels are slightly angled, creating an interesting play of light and shadow and helping animate the towers, the architects added.

The facade treatment – along with the towers' positioning – help reduce energy consumption.

"Designed to self-shade, each elevation is formed to respond to its specific solar orientation and optimised to reduce energy use for cooling," the team said.

The architects have also incorporated a heat capture system that will help cut down on energy use. 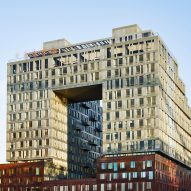 "Excess heat produced from the workspaces, which is traditionally ejected from the top of the building, will be captured and reused for the residential component, significantly reducing energy use," the team said.

The housing block offers 332 apartments, with 66 designated for low-income tenants.

The units range from studios to one- and two-bedroom apartments. The smallest residence measures 900 square feet (84) and the largest is 1,240 square feet (115 square metres).

The podium contains retail space and restaurants, along with a gym and other tenant amenities. The roof has a garden and pool, with landscaping designed by New York firm James Corner Field Operations.

Glazed walls at street level help foster a connection with the neighbourhood.

"The storefronts are designed to allow for variation and unique identities to promote visual evolution and adaptation over time, like the historic streetscapes found throughout Williamsburg," the team said.

Other projects at the Domino Sugar Refinery include a waterfront park by James Corner Field Operations, which features an industrial-style playground and sunbathing chairs, and a 16-storey building by SHoP Architects that has a large hole at its centre.

The photography is by David Sundberg/Esto.