Concrete and darkened cedar make up the facades of a Seattle home that was designed by architecture studio GO'C for a family of eight.

The Sound House is located on a sloped property in the city's Magnolia neighbourhood – a site that offers vistas of the downtown district and the Puget Sound. The dwelling sits atop an existing plateau that formerly held a house dating to the 1920s.

The architects had several guiding concerns, including capitalising on views and respecting the area's density and scale of surrounding buildings.

They also needed to create a spacious atmosphere for a newly blended family of two adults and six children. The father owns a record label, and the mother is a best-selling author.

"An emphasis was placed on providing large shared spaces to enjoy together and smaller areas of retreat for all members of the family," said local firm GO'C, formerly known as goCstudio.

The team devised a 5,500-square-foot (511-square-metre) home that is roughly L-shaped in plan and rectilinear in form. The building has two levels and a basement.

The northern elevation, which faces the street, consists of stacked, horizontal bars and an adjoining box that holds a garage. The southern elevation is more dynamic, with volumes that push outward and retreat.

"The massing of the house allows it to appear in scale with neighboring properties on the north side and opens up to the south as it cascades down the site," the team said.

The lower portion has concrete walls that ground the building to the site, while the top level is clad in vertical, tight-knot cedar slats with an ebony stain. Over certain windows, the slats form screens that pivot open and closed.

Set back from the street, the entrance leads into a wide hall that offers a sightline through the home.

The ground level holds an open-plan kitchen, dining area and living room, all of which connect to a rear terrace. A fitness room and library are also found on the ground floor.

The double-height living room has ample glazing, bringing daylight deep into the home. A steel staircase with wooden treads leads to the upper level, where there are two wings connected by a bridge.

The east wing holds the parents' bedroom suite and cantilevers over the backyard, while the west arm encompasses the kids' sleeping area.

"The kids' side functions as a bunkhouse of sorts, with six small bedrooms arranged around a sun-filled central play space with a large skylight above," the architects said.

The children's play area extends outdoors to a terrace built atop the garage. The upper level also contains a small office.

A staircase within a light monitor leads to a roof deck, where the family grows vegetables and herbs in a 500-square-foot (46-square-metre) garden.

"The roof serves as an additional gathering space for the family and also houses an 18-panel solar array to offset energy usage," the team added.

The basement contains a game room, movie room, wine cellar and laundry facilities, and leads directly to the swimming pool. 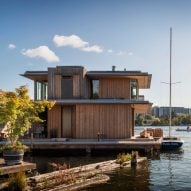 The home has energy-saving features, including extra insulation and a radiant-hydronic heating system.

For the interior design, the team used durable finishes that could withstand daily use from a family of eight. Creating a cosy yet refined atmosphere was also important.

"Natural warmth was derived from the texture of the interior plaster, the use of warm woods, and the patina of the concrete and steel," the team said.

GO'C was founded in 2012 by Jon Gentry and Aimée O'Carroll. Their other projects include a winery tasting room that features cedar cladding and a rigorous structural grid and a Seattle apartment that doubles as a photographer's studio.