Disney Home brings together various existing products under one roof including kids' bedding and homeware made by Disney and its affiliated designers and retailers.

"As our homes are now more important than ever, we wanted to introduce a new homeware brand that brings iconic Disney storytelling into everyday living spaces," a Disney representative told Dezeen. "The result is Disney Home."

Blockbuster franchises including Star Wars, Marvel and various Pixar films are featured within the Disney Home range alongside classic characters such as Mickey and Minnie Mouse.

"This newly defined interiors brand encapsulates homeware products from a range of our licensees and retailers and will also include new products such as aspirational furniture and one-off collaborations," said Disney.

"However, there is one shared ethos – all products under the Disney Home brand are created to complement every interior style and budget." 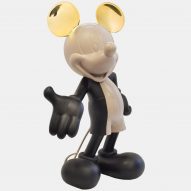 Among the higher-end pieces in the Disney Home collection at launch is a range of figurines by "pop sculpture" studio Leblon Delienne, including the life-size reimagining of Mickey Mouse created by interior designer Kelly Hoppen.

There is also a collection of rugs by Ruggable, which Disney says offer a "modern and sophisticated interpretation" of some of Disney's celebrated characters and stories.

The Mickey Doodles rug, for instance, features drawings of Mickey Mouse in loose minimal lines while The Rebellion rug shows a painterly rendering of the Millennium Falcon and Rebel Alliance Starfighters from Star Wars over a black background.

Details on the one-off collaborations that will fall under the Disney Home umbrella are yet to be announced.

The Disney Home news comes two months after Disney announced another major expansion for the company with the building of resort-like mixed-use residential communities in the US.

The first Storyliving residential development is set to be constructed in California's Coachella Valley, where the company's late founder Walt Disney owned a home.

Some of Disney's previous homeware products include a Winnie-the-Pooh glassware set by Nendo and a Star Wars furniture collection by Filipino designer Kenneth Cobonpue, which features a wooly stool designed to emulate Chewbacca's hair.