Architecture studio Haworth Tompkins has connected a pair of listed warehouses with a chainmail-clad pavilion to create an entrance to immersive theatre company Punchdrunk's London home.

Built across a road that separates two cannon-manufacturing warehouses in Woolwich that will be used as a venue for Punchdrunk's immersive shows, the pavilion was designed to create a street presence for the venue.

"During the evening performances, the pavilion glows like a beacon drawing people into the show," said Haworth Tompkins director Lucy Picardo.

"It is the only new-build element to be constructed on the site and it contrasts the relative anonymity of the warehouses," she told Dezeen.

Built on a road and connecting the heritage-listed warehouses, the structure is a temporary building that is set to be in place for seven years.

It contains an entrance foyer and box office for the venue as well as a pair of corridors that connect the two performance spaces, which visitors will walk through during the immersive shows that take place across both warehouses.

Constructed with a lightweight timber frame supported on sand-bag foundations, the pavilion is enclosed in polycarbonate on its street-facing facade.

This is decorated with a pair of bronze-coloured chainmail curtains that were coloured to complement the surrounding brick warehouses.

"We selected materials that were lightweight, cost-effective but created a sense of arrival and activity beyond," explained Picardo.

"The translucency of the polycarbonate ensures that the pavilion glows when evening performances are in session and the decorative chainmail curtains are then drawn back creating a convivial sense of arrival and intrigue," she continued.

"During the day the chainmail is muted, and tonally in keeping with the brickwork of the adjacent listed warehouses." 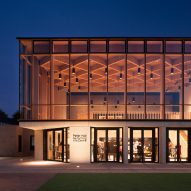 Alongside the entrance pavilion, Haworth Tompkins also created a cloakroom space and toilet for the venue in one of the adjoining warehouses.

The studio is also collaborating with Punchdrunk to design its offices, which occupy a third warehouse on the site.

Set up by Graham Haworth and Steve Tompkins in 1991, Haworth Tompkins is a leading UK theatre architect, which won the Stirling Prize for Everyman Theatre in Liverpool in 2014.

Recent projects by the studio include a performance centre with a triple-height glazed foyer in Cambridge and a public foyer for Bristol Old Vic Theatre.

The photography is by Fred Howarth/Haworth Tompkins.