Located in central Tokyo's Toronamon-Azabudai District, the mixed-use tower – one of a complex of three skyscrapers that Pelli Clarke & Partners is designing for developer Mori – has reached its full height.

At 330-metre-tall, A District takes the title of Japan's tallest building from Abeno Harukas, a 300-metre-tall building in Osaka that was also designed by Pelli Clarke & Partners and completed in 2014.

"Out of our three projects on the site, the main tower is perhaps the most visual on the skyline," said Pelli Clarke & Partners senior principal Fred Clarke. "It is the first thing visitors will see upon arrival in Tokyo."

The building is expected to be fully completed in 2023 and will house large-scale office space, luxury residences, medical and research centres, as well as schools and retail facilities.

Pelli Clarke & Partners began construction on A District in 2019.

The Toronamon-Azabudai District will span eight hectares and include two smaller towers by the studio, as well as a planted pergola designed by Heatherwick Studio.

The offices will occupy 204,000 square metres across 45 storeys and boast a largely column-free interior. 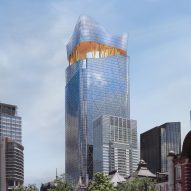 The studio explained that the structure will employ earthquake resistance systems, including emergency generators and emergency elevator systems to ensure safety in case of impact.

Education centres, such as The British School in Tokyo, will also be housed within the tower. It will boast an eight-floor campus that will be host to 700 international students.

The fifth and sixth floors of the 64-storey tower will be dedicated to the Keio University Center for Preventive Medicine, a medical treatment and research facility.

Pelli Clarke & Partners is an architecture studio founded by Argentine-American architect César Pelli, who died in 2019 aged 92. It was formerly known as Pelli Clarke Pelli Architects.

In 2020, the studio worked with Giorgio Armani to create a residential skyscraper in Sunny Isles Beach, Florida.

Earlier in 2021, Sou Fujimoto Architects and Mitsubishi Jisho Sekkei unveiled a design for a 390-metre tall tower in Tokyo, which once built will surpass A District in height by 60 metres.

Top image is by DBOX for Mori.