Thirty-three families have now moved into the homes as the first part of the pilot housing project. Each of the 28-square-metre homes are arranged around a series of courtyards that were designed to encourage interation between the residents.

The decision to create these courtyards came about through communication with the local residents, who previously lived in homes often made from corrugated sheet metal or reclaimed materials such as scrap metal.

"This slum has a series of open areas of varying sizes where the residents spend most of their time," CDA managing director Sandhya Naidu Janardhan told Dezeen.

"These shared spaces have evolved over the years based on the relationships and interactions between the residents – women use this area to prepare food for cooking, wash utensils, elderly sit outside as they watch children play, and goats and dogs share these spaces as well," she continued.

"The outdoor spaces make for a robust social infrastructure that the design for the new redevelopment attempts to emulate and replicate through a participatory design process with the residents."

The Sanjaynagar buildings were constructed from locally-made bricks made of fly ash, crushed sand and cement.

The roofs draw on vernacular construction and are built with a plank and joist system made of steel I-sections and stone slabs.

"For the facade facing the courtyard, screens made of split bamboo and steel frame provide an interesting play of light and shadow along the corridors throughout the day," Janardhan said.

"The use of color for window frames and the balcony railing adds contrast to the monochromatic facade."

Residents in the slum wanted the homes to have good lighting and ventilation. Also important were adequate space for pets and animals, as a number of families own livestock, as well as plants and outdoor seating.

Inside the homes, residents designed their own interiors.

"The participatory design process evolved at different scales of the neighbourhood – starting with the masterplan, coming down to individual buildings and finally each family designing their apartment interiors facilitated by the community architects," Janardhan explained. 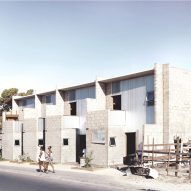 "The apartment typology allows for multiple combinations and iterations based on the preference of the families," she added.

"This flexibility not only allows for keeping many of the families together, especially those that are eligible for more than one home, but also assigns a unique identity to each family."

Sanjaynagar, which originally housed people who suffered from leprosy and were relocated here under a government scheme, has around 1,400 residents.

The current homes are without sanitation facilities and the sheet-metal houses become "unbearable" in the summer when temperatures can reach 45 degrees celsius, Janardhan explained.

"Creating dignified housing will help families living in slums overcome social and cultural obstacles that they face in their daily lives – whether it is enrolling their kids in a school of their choice or securing employment," she said. 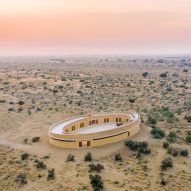 Construction of the remaining 265 homes is set to begin in November of this year.

"When the redevelopment is completed, Sanjaynagar will be officially denotified as a slum and the new neighborhood will provide not just a safe, healthy and vibrant place to live, but provide an opportunity for future generations to flourish and thrive both socially and economically," Janardhan said.

Residents contribute funding towards their new homes and can apply for low-interest non-predatory loans from social lending partner Rang De, with the project also functioning as a way to get more women on the housing ladder.

Once the project completes, the amount of female ownership in the community is expected to rise from five per cent to fifty per cent.

CDA, which is an initiative of the Curry Stone Design Collective, worked in partnership with Ahmednagar Municipal Corporation and local non-profit Snehalaya on the project.

It is a public/private partnership that is funded by the Indian government through its Housing for All (PMAY- Urban) program.

Ahmednagar Municipal Corporation and the US-based Curry Stone Foundation also contributed funding, along with the residents themselves.

The photography is by Rajesh Vora.