Mexican gallery Masa's Intervención/Intersección exhibition showcases pieces by artists and designers including Frida Escobedo and Isamu Noguchi in a former post office in the Rockefeller Center in Manhattan.

The exhibition, which is travelling gallery Masa's first in New York City, presents works by a variety of individuals who lived in or were affected by Mexico City.

Intervención/Intersección is curated by Su Wu, who chose works by both contemporary designers and 20th-century figures – such as Noguchi – who reference Mexico.

Works have been set up both inside a reconstituted United States Post Office space inside the Rockefeller Center and in the public spaces around its outdoors skating rink.

The exhibition aims to challenge "conventional understandings of the public and monumental established by the Mexican masters," Masa stated.

Instead, it will be "showcasing how works of intimacy, process, and personal history might find rousing public expression in both design and art," the gallery said.

"I wanted to pursue things that are discarded or unrealized or rendered functional but in a way that is not necessarily aligned with comfort or utility," curator Wu told Dezeen.

Among the designers on show is Mexico City-based architect and designer Escobedo, who has two experimental chair designs in the exhibition.

One of these is a reconsidered museum bench called "Creek Bench" made of nickel-finished ball chains stretched over an iron frame.

Also featured in the show are works by Ewe Studio, including a collection of sand-casted bronze stools as well as sculptural green onyx pieces, which have been placed for the public aspect of the installation in the plaza around Rockefeller Center.

Fabric works by Pia Camil are stretched on the beige-painted walls of the gallery space, and her work was also chosen for the outdoor space, with an installation called “Air Out Your Dirty Laundry” that sees 700 pieces of clothing strung on clotheslines over the plaza.

Tepoztlán-based Alma Allen's bronze stools, meant to be a comment on disability, have been put in conversation with massive hammered-copper, doughnut-shaped chairs by American Brian Thoreen. 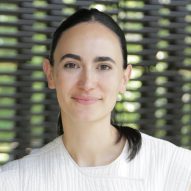 Also on show are elegant lighting and seating projects by Esrawe Studio, while Jose Dávila's engaging conceptual works that play with suspension adorn some of the gallery walls.

Chairs by Pedro Reyes, a metal bench with a horse-hair seat by Hollie Bowden, and a wooden screen shaped like a sound wave by Xavier Loránd can also be seen at the exhibition, which is open by appointment.

Self-taught artist Martín Ramírez's work is included among the pieces by 20th-century artists, as are works by American artist Noguchi that were influenced by his time in Mexico.

Masa is a "nomadic gallery" founded in Mexico City in 2018. Past exhibitions have been staged in unusual locations, including one in a mansion outside of Mexico City and one in a Mexican castle.

Intervención/Intersección is open by appointment at Masa at Rockefeller Center until 24 June. See Dezeen Events Guide for an up-to-date list of architecture and design events taking place around the world.

The photography is by Caylon Hackwith