Architects should collaborate more with artists and designers to inject a sense of fun into their often-serious projects, London designer Yinka Ilori tells Dezeen in this exclusive interview.

North London-born Ilori, who recently designed his vibrant new studio with architect Sam Jacob, told Dezeen of his belief in the importance of multidisciplinary creativity.

"I want to see a lot more architecture and artist collaborations, and that's why I've been working with Sam," said the designer, who is known for applying bold colour to his work and also referencing his Nigerian heritage.

"It's so important. Architects obviously have a very serious job, which I think then has an effect on their creativity, to not be as playful or experimental."

"Whereas I think where I come in is I bring the humour, the community and the joy, which I think is what's lacking in some architecture."

Ilori previously joined forces with architecture office Pricegore to design The Colour Palace, an interactive pavilion featuring a multi-hued facade that was installed outside London's Dulwich Picture Gallery for the 2019 London Festival of Architecture.

Taking cues from the vibrant fabrics found in Balogun market in Lagos, as well as those in the markets of nearby Peckham, Ilori designed both the structure and the colour palette of the pavilion with Pricegore.

"I think that project, in particular, did open architects' eyes to collaborating with artists more," reflected Ilori.

"What you do then, is you eliminate an important part – young kids. Because they are the next generation. They're the ones who we want to hopefully inspire to make the world a better place."

"It's a nice way of opening up a topic"

While vivid colour characterises Ilori's portfolio of work, which includes furniture and public art, he insisted there is a greater meaning behind it than simply cheerful aesthetics.

"Sometimes I use colour as a way of starting a conversation," explained the designer. "It's quite a nice way of opening up a topic and softening what could be a harsh reality."

According to Ilori, community engagement is at the heart of what he creates, shown in projects such as the Launderette of Dreams, a temporary installation that appeared in east London at the end of last year.

Incorporating more than 200,000 Lego bricks, the installation intended to pay tribute to the role of launderettes in communities while also engaging children in art and design.

"Being in a launderette space, watching your clothes go round and round, it brings an element of togetherness," said Ilori.

"I live and breathe the work I put out"

Another recent Ilori project that aims to harness the attention of both children and adults is Listening to Joy, a wiggly technicolour maze currently on display at the V&A Dundee museum, which explores the differences between how both younger and older people approach interactive play.

"One of the things I really care about is that this is a lifestyle," Ilori said of his installations.

"It's not just that I am this 'king of colour' and I tell stories. I actually live and breathe the work I put out into the community."

"It's kind of through the way I speak, my energy, through what I wear. Because it wouldn't be fair if I was projecting joy and love and happiness and not being happy." 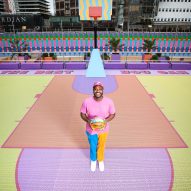 "I have grumpy days but pretty much I'm a positive person, and I think that has come from my upbringing and my family," he added.

Having grown up in a diverse neighbourhood on Essex Road in Islington before studying Product and Furniture Design at London Metropolitan University, Ilori's breakthrough project is widely considered to be If Chairs Could Talk (2015), a collection of multicoloured upcycled chairs.

Ilori cites his Nigerian heritage as a formative influence on his work, which he described as "very emotive".

"I've always been obsessed with stories. My parents always told me about their childhood," he said, explaining that his chair collection was informed by the tales he grew up listening to.

The designer said that pairing colours together is something he feels able to do as a result of being exposed to many vibrant combinations in his younger years.

"Because I've seen these [colour] palettes for so long, they do come naturally to me," he considered.

"There are no rules. There's no Pantone Colour of the Year, there's no 'that is the right way of working', and my mum and dad, especially Nigerian women, will coordinate their own toning, their own shades and textures. They're not worried about clashing."

"I really believe in cultural exchanges"

Ilori said that he would like to see more of London's multiculturalism reflected in its architecture, which he has intended to do with projects such as Bring London Together.

Created as part of last year's London Design Festival, the project involved 18 of the city's pedestrian crossings being transformed from traditional black and white stripes into bright bands of colour.

"I was chatting to someone the other day and they said they'd been to Mexico. And they said, London is so grey [in comparison] and I was like, you're right."

"But London is so full of culture. The energy's colourful. The food, the race, what we wear. Everyone's so individual. But it's not reflected in our architecture. I'm gonna change that."

"I really believe in cultural exchanges. The more you learn about different cultures, the more it makes for a better world."