Design studio Piscina, which is led by Natalie Shook, has been named Best in Show and Best Emerging Designer at the 2022 ICFF Editors Awards.

Shook exhibited side tables, shelving, candle holders and a knife block as part of her first collection under the Piscina label at New York's International Contemporary Furniture Fair (ICFF), which ran May 15-17.

The collection saw Shook named Best in Show and Best Emerging Designer at the trade show.

Its standout piece was the Ledoux Shelving, which was designed around a seven-foot spine-like column with grooves informed by the columns of the Royal Saltworks in Arc-et-Senans, France, designed by neoclassical architect Claude Nicolas Ledoux.

The column was made from solid wood and was designed in collaboration with Wes Rozen, Shook's husband who is an architect.

In the gaps between the cubes various symmetrical and asymmetrical forms can be inserted to act as sculptural shelving.

The design walks the fine line between maximalism and minimalism and is noteworthy for the high level of variation as ten different forms can be inserted into the column as shelves.

The forms of the shelving are based on the work of Japanese sculptor Isamu Noguchi, Shook told Dezeen.

"For our first collection, we really looked to a lot of our favorite inspirations," she said. "And then I think going forward, we will branch out from here."

Other parts of the collection included the Reader Side Tables, which have ceramic bases and come in two different sizes. The ceramic bases have playful sculptural forms on the side and the removal tops are made of solid wood.

Shifting material focus, the Landscape Candle Holders are pyramidal and made of solid cast iron with a black wax patina. 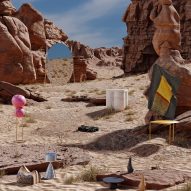 Tradition and playfulness meet in Departures collection of Jordanian design

The Media Knife Block has a ceramic body and two spouts, one large and one small. The spouts have been filled in with shredded walnut that Shook hopes will have beneficial anti-microbial properties.

Shook told Dezeen that while the tones of the collection on show were neutral, she thinks Piscina will branch into more coloured designs for future iterations of these items and in the collections to come.

Piscina won awards for its work during ICFF's Editors Awards decided by members of the design press, a body of jurors in which Dezeen participated.

ICFF is a yearly showcase and trade fair in Manhattan in collaboration with WantedDesign and NYCxDesign, which this year celebrated its tenth anniversary. Other design festivals on the horizon include Milan's design week and 3 Days of Design in Copenhagen, which will both take place in June.

The photography is by Jason Lecrass.

ICFF took place from 15-17 May 2022 in New York, USA. See Dezeen Events Guide for an up-to-date list of architecture and design events taking place around the world.