Harrison – a student on the Material Futures masters at Central Saint Martin's – created her bio-glass using the ground-up shells of quagga mussels in combination with local sand and waste wood ash.

Bureau de Change founders Katerina Dionysopoulou and Billy Mavropoulos have worked with Harrison to explore whether this material could be used to create an eco-friendly cladding for buildings.

Together they have created a series of cast glass facade tiles, featuring patterns inspired by 19th-century terracotta chimney pots.

They presented the results in the exhibition Beautility: How Fusing Beauty and Function Can Change the World, curated by Here Design, which took place as part of London Craft Week.

"Thames Glass has the potential to become a sustainable cladding material in the future," Mavropoulos told Dezeen.

"Glass as a material is already sustainable, as it is infinitely recyclable," he said. "Thames Glass offers an even more sustainable alternative, because it uses local waste materials."

Quagga mussel shells often end up in landfill in the UK. This is because the invasive, non-native species causes blockages in Thames Water transfer tunnels and has to be removed.

Thames Glass came about through a collaboration between Harrison and the utility company, to find a way to give this natural material a second life.

Harrison's experiments in this material resulted in a series of blown-glass vessels, including carafes, tumblers, jugs and vases.

However, the collaboration with Bureau de Change – whose portfolio includes an intricate bronze elevator and a terrazzo-filled house extension – allowed the glass artist to learn how this material might be used on an architectural scale.

The design that Dionysopoulou and Mavropoulos developed is intended to draw on London's architectural history.

The architects looked back at the Royal Doulton, which manufactured the city's water pipes in the mid-19th century, as well as the city's ornamental terracotta chimney pots. 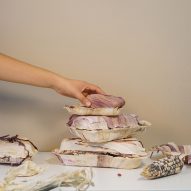 The cast glass tiles replicate some of the same intricate 19th-century patterns.

In line with this concept, Bureau de Change has constructed a narrative to revive three of London's lost Thames-side pubs and inns, and using Thames Glass tiles to give each one a unique, illuminated facade.

"Scavenging the antiquities of the Thames marshland led us to discover the lost architectural enigmas of riverside public houses," said Mavropoulos.

"We have re-imagined these lost forms of the waterside district, creating illuminated architectural silhouettes constructed of cast glass tiles," he said.

"These structures will exploit the material properties of glass, acting as a beacon and serving its historic purpose as a place of gathering and useful landmarks for both sides of the Thames."

Thames Glass was one of three collaboration projects to feature in the Beautility exhibition. Each brought a Material Futures student together with an industry partner to create future visions of everyday objects.

Mavropoulos believes the eco-glass could have a real future in architecture – although there would be challenges.

The handmade nature of the bio-glass means that each tile is unique in colour and finish, and imperfections are common. It would be hard to test and certify in terms of safety and durability.

However, Mavropoulos believes the naturally occurring texture and unique colouration are the material's best qualities and are what makes the tiles so effective.

"Each tile has its own micro-texture that beautifully interacts with light," he added. "Together with the material grain, the traces of the casting process create depth and enhances the Victorian motifs."

Beautility: How Fusing Beauty and Function Can Change the World took place as part of London Craft Week, which took place from 9 to 15 May 2022. See Dezeen Events Guide for an up-to-date list of architecture and design events taking place around the world.