The Regenerative High-Rise is a concept for a modular timber tower by architecture studio Haptic and engineering firm Ramboll that could be used to transform tricky sites in cities worldwide.

Aiming "to futureproof the high-rise", the conceptual structure is designed for maximum flexibility to extend the lifecycle of tall buildings and prevent the need for their demolition.

It was developed by Ramboll with Haptic's research arm, Haptic Green, specifically for use on complicated sites in inner-city areas that are often overlooked.

Buildings must be "more flexible to change"

The Regenerative High-Rise lends itself to be used for anything from housing, offices and hotels to leisure or production facilities, but the idea is that it can also be adapted to a city's changing needs.

"The project is designed to push boundaries in sustainable, adaptable high-rise architecture, and the universal design concept could be commissioned for any city in the world," explained the team.

It is the latest project in an ongoing collaboration between Haptic and Ramboll and is hoped to help shift focus from the height of high-rise buildings to their function and flexibility.

The concept also addresses the carbon footprint of tall building construction, which the team said it sees as "a call to action to develop new typologies for vertical urbanism" in light of climate change.

"We need to design buildings that are more flexible to change," explained Haptic's director Tomas Stokke.

"We have seen too many examples of new buildings being demolished because they are unable to be adapted to new uses," he told Dezeen.

The Regenerative High-Rise's design centres around a timber-composite superstructure comprising three-storey structural decks that are fixed in place.

If built, each of the main decks would be engineered to support up to three secondary floors, or up to three levels of pods that can be slotted in and out to alter the tower's use.

The servicing strategy would be localised to ensure adaptability and a maintenance unit at the top of the tower would be used to lift and replace the pods and secondary floors.

The choice of a timber-composite superstructure was partly because it offers a warmer aesthetic than traditional materials such as concrete and glass, which are commonplace in contemporary high-rise design.

Timber construction also has a lower carbon footprint than these alternative materials, making it "one of the best building materials", according to Ramboll.

"Timber is an amazing material with carbon, aesthetics and as an insulator but for high-rises it really works best when paired with other materials," added Shonn Mills, Ramboll's global director of high rise construction.

"We know some designers are religious about pure timber but for the Regenerative Highrise we wanted to use a combination of materials to take advantage of the best that timber, steel and concrete can provide."

The team hopes that by catering for adaptability, the whole-life carbon footprint of a building of this kind would also be dramatically reduced.

"The core and the 'hard floors' can have a life span of a hundred years or more, whereas the in-between 'soft floors' can be changed out more often."

To demonstrate the potential of the concept, the team has applied the model to the complicated site of a disused motorway viaduct in Oslo's inner city that is currently regarded as an obstacle.

As illustrated in the visuals, this tower imagines linking transport networks in the area to serve as a multi-modal interchange. It also contains housing, workspaces and various cultural and leisure facilities.

The tower is topped by a "hilltop in the sky", containing green space that looks out over the city.

Proposal is "the future of architecture"

According to Haptic and Ramboll, this proposal demonstrates how the site can be "reappropriated for leisure use and become a positive contribution to the city".

The team will now continue to develop The Regenerative High-Rise concept and are in the process of writing a research paper to summarise their findings.

"We have discussed the proposal with a number of potential clients, and would love to build the project," concluded Stokke. "We think the ability to adapt to change is a necessity, and this kind of flexible building is the future of architecture." 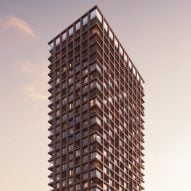 Another pioneering project that is challenging the traditional design of tall buildings includes Danish studio Schmidt Hammer Lassen's 100-metre-tall housing block that will be the world's tallest timber building when it completes.

Architecture firm ADDP is designing two prefabricated skyscrapers that will be constructed in Singapore, which is hoped to minimise dust and noise pollution.

The visuals are by Forbes Massie.