Danish studio Schmidt Hammer Lassen has revealed its design for a 100-metre-tall housing block in Switzerland, which will be the world's tallest timber building when it completes.

Named Rocket&Tigerli, the terracotta-clad building is set to be built on a former industrial site in the city of Winterthur, near Zurich.

It will be comprised of four volumes of different heights, one of which will rise to 100 metres tall making it the world's tallest building with a load-bearing timber structure.

Set to complete in 2026, the Swiss residential building will surpass the current tallest timber residential tower, the 85.4-metre-tall Mjøstårnet building, by 14.6 metres.

It will have a mass timber structural core and load-bearing system that was developed in partnership with construction company Implenia and Swiss university ETH Zurich.

Rocket&Tigerli will contain housing, student accommodation, a restaurant, retail spaces, a sky bar and a hotel across its four blocks. At ground level, these volumes will be connected by a green public plaza and alleyways.

According to the studio, each of the four blocks will have its own visual identity to help residents create a sense of belonging to the site and neighbourhood.

The buildings' exteriors will be clad in red and yellow terracotta bricks with green detailing to reflect and mimic the red roofs and yellow brick of the area's surrounding buildings.

"Even the blinds embedded in the building get their dusty green colour from the steel structures you find within the big assembly halls," he told Dezeen.

The blocks will have a gridded exterior formed by horizontal and vertical bands of brick and tile. Balconies, terraces and squared stretches of glass will fill the spaces between the exterior bands bringing daylight into each of the residential units from two sides.

A number of green spaces will top the roofs of the block alongside photovoltaic panels.

Ahlmark explained that the studio wanted to create a landmark in the Swiss city.

"We conducted a series of analytical imagery to see how this building would appear in configuration with the other tall buildings of the city," said Ahlmark.

"Further to this, we wanted to create a landmark that would contribute to the choreography of taller structures already standing in the heart of Lokstadt," he continued. 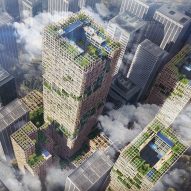