3me Arquitectura has taken cues from the pyramidal grain silos found locally to create the entryway for the headquarters of the Association of Agricultural Producers in the state of Guanajuato, Mexico.

The building, which surrounds a central courtyard, was designed as a headquarters for a local association of people that manages centralized irrigation of the region.

"The Irrigation Module project, which is the headquarters of this association, aims to boost the region's economy and its values," said Guanajuato-based 3me Arquitectura.

"Through various actions, it seeks to provide hope and certainty to crop production by generating jobs and agricultural products, strengthening an interest in the land and reaffirming identity in a conscious attempt to curb migration."

The result was a 723-square-metre complex that takes influences from traditional agricultural buildings to create a functioning meeting place and headquarters for the association.

For 3me Arquitectura it was essential to understand both the history and the needs of the organization "through the lens of historical memory, recognizing the scale at which these activities have been developed and carried out and their importance in the region at a cultural level."

Functional agricultural buildings, haciendas, and convents were places that the studio looked to in the conception of the Irrigation Module.

The primary structures are two pyramids take their shape from the grain silos constructed traditionally in the region that sit at a skewed angle in relation to one another.

Naturally shaped stone was laid for the flooring of the open-air courtyard. This open space flows into all of the indoor meeting spaces, the facades of which were constructed with the same red brick as the pyramids at the entrance.

Alongside the pyramids are two single-storey buildings with colonnaded walkways that enclose the courtyard. These walkways provide entrance into the pyramids as well as a large auditorium tucked into the back of the site.

Concrete was used to line the entryway of the buildings and for the columns.

At the rear end of the courtyard is a reflecting pool. The section of the patio here has no columns and fronts the floor-to-ceiling glazing of the primary reception area.

Through this main building, one can access a variety of smaller meeting spaces and conference rooms. 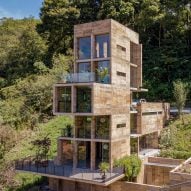 The interiors have stark white walls with polished stone floors. The pyramids have large skylights at their apexes while the flat-ceiling meeting rooms have inset lighting.

"For the construction, we considered the capacity of the region's workforce and thus decided to use stones recovered from fields, traditional brick and exposed rough concrete," said the studio.

"It is only through the experience of space that we rediscover the value of the utilitarian and vernacular buildings characteristic of this territory."

Other buildings architectural projects in the central Mexican state of Guanajuato include a gabled holiday home wrapped around trees by Fabián M Escalante H Arquitectos.

The photography is by Luis Young

More architecture and design from Mexico