Dutch designer Marcel Wanders is to "freeze operations" at the design studio that bears his name and step back from the business for an indefinite period.

Wanders will close Marcel Wanders studio until further notice and instead dedicate himself to a smaller number of projects.

"I have decided to freeze operations of the Amsterdam studio for an indefinite period," said the 58-year-old designer, adding that his sabbatical "doesn't have yet an ending date".

Wanders will continue to be involved in Moooi, the design brand he co-founded in 2001 and now owns and which is unaffected by his decision.

The decision comes a few months after Wanders was involved in a serious car accident in Mallorca, the Spanish island where he spends much of the year.

"At the end of last year, something happened to me privately that made this voice speak louder inside of me," he said.

"I was injured during a severe car accident at Mallorca and I'm still recovering but thank god, I'm in the hands of good professionals. The fact that I'm walking and I'm not in a wheelchair is already more than the doctors expected."

Support plan to help employees "take the next step"

The studio's creative director Gabriele Chiave had "already found his new path," Wanders said. A support plan is in place to help employees "move on and to take the next step in their career."

“It's been already a few years now that my mind and my heart have been reflecting on how I should bring the output of my creativity out to the world," Wanders said.

"I have been feeling a sense of dissatisfaction and an urgency inside myself to change something in my creative life and process," he continued. "In my 35-year career I have taken hundreds of projects to completion but now I know that I want to do less."

"I want to concentrate all the energy I have left inside of me only on a smaller number of creative projects," Wanders explained. "I feel like I cannot handle the daily studio work that I managed for so long. I'm looking for focus, depth and meaning like never before in my life."

"Maybe it's my age, maybe it's what happened to me last year, maybe this is the turn that my heart has taken but, I have decided to freeze the operations of the Amsterdam studio for an indefinite period of time in order to be true to my new self," he added.

"Let me repeat this, I will continue to create and contribute to the design world but I will just do it differently."

"I will still create"

Wanders, whose career spans 35 years, is one of the world's most influential designers and has designed many groundbreaking products including the 1996 Knotted Chair, which is made of cord stiffened with epoxy resin.

His 2001 Airborne Snotty Vase was one of the first designs to make use of digital scanning technology, capturing mucus particles emitted during a sneeze and turning the random forms into a series of vases. 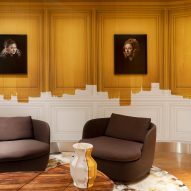 Marcel Wanders studio has been the vehicle for Wanders' prodigious output since its foundation in 2002 years ago, producing over 1,900 different projects including furniture, lighting, interiors and artworks.

More recent projects include a VIP lounge at Amsterdam's Schiphol airport and the exterior of a Louis Vuitton store in Miami.

"I'm not abandoning the design world," Wanders said. "I will still create. I will just create less."

The images are courtesy of Marcel Wanders studio.