London-based hospitality group Ennismore has opened a hotel in the Poblenou neighbourhood of Barcelona that draws on the bright colours and architectural style of Spanish architect Ricardo Bofill.

Named The Hoxton Poblenou, after the neighbourhood in the east of the city that was once a hub for the production of textiles where it is based, the 240-room hotel is The Hoxton first Spanish location.

Ennismore's design team looked to the work of the late architect Bofill, whose studio is situated nearby,  for the hotel's interiors. The Spanish architect, who passed away earlier this year, was known for his use of colourful geometric forms and conversion of a dilapidated cement factory into his own studio.

"His ingenious way of reframing and reimagining old industrial buildings led to many of the architectural features," she told Dezeen.

"The use of simple local materials such as ceramic tile, terracotta and concrete was also something that rang true to us from Bofill's aesthetic."

Alongside the guest suites, the hotel has a rooftop with a pool and bar, pizza restaurant and a bodega. Three meeting and events spaces make up an area named The Apartment, while a basement space called La Cave hosts local events.

The Hoxton Poblenou's lobby was framed by floor-to-ceiling windows and curved doorway arches. The focal point of the space is a curved all-day bar serving coffee and drinks that is fronted by a colourful hand-painted mural.

Elsewhere in the lobby, potted plants, rattan chairs and other seating upholstered with tactile fabrics and patterns can be found.

Lobbies at The Hoxton's range are open twenty-four hours to both guests and members of the public as they are designed to be social, community hubs.

According to Flynn, the designers opted for Mediterranean colours in the common areas, as in the peachy plastered walls and tan-hued leather sofas because The Hoxton Poblenou was their first opportunity to design a hotel in a hot and sunny climate.

"Bright, sun-drenched palettes, swathes of sheer materials and Mediterranean planting were an absolute must to provide some exotic escapism," said Flynn.

"The colour palette ties all the spaces together; reminiscent of a typically Spanish vista featuring terracotta, ocean blues, sunny yellow hues, olive greens and our own addition of pastel and raspberry pinks."

Upstairs in the guest rooms, faded floral prints embellish the soft furnishings while bespoke tapestries handmade in India hang above every bed in a nod to Poblebou's fabric-making past.

In many of the rooms, the designers departed from their usual choice of timber flooring, which can be found in The Hoxton Southwark. Instead, they opted for terracotta, in an echo of traditional Spanish homes. 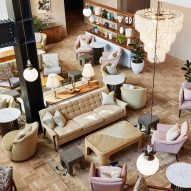 "Typically, we've always designed bedrooms with a timber floor, but it felt like an appropriate and natural departure point for us given the location," explained Flynn.

"We layered the space with plenty of rugs in natural Jutes and a deep saturated jewel-toned blue natural wool," she added.

"Earthy and oceanic tones are chief in the fabrics and artwork sat against a breezier green and white backdrop."

Natural materials like wool and rattan were used throughout the suites in the furniture and lighting, as an ode to Esparto weaving – a traditional Spanish craft. In the bathrooms, several of which have bathtubs, terracotta tiles line the floors and walls.

A large majority of the furniture and lighting at The Hoxton, Poblenou was designed in-house and produced in Spain and Portugal.

Key vintage items were sourced from around Europe such as a pair of woven armchairs from the Dutch department store Vroom & Dreesman and a floor lamp from the 1960s by Vico Magistretti for Artemide.

The first hotel in The Hoxton series was opened by Ennismore in 2006 in London. The Hoxton now has 11 locations across Europe and the US, three of which are in London.

For The Hoxton Portland, Ennismore transformed a historic building in Portland, Oregon, into a hotel with refreshed modernist-influenced interiors while The Hoxton Chicago which is located on the site of an old meatpacking facility references the industrial nature of its past.