London hotelier Ennismore has opened an outpost of The Hoxton, including a co-working lobby space and rooftop pool, on the site of an old meatpacking facility in Chicago.

The Hoxton Chicago marks the third US outpost of The Hoxton, following others in Portland, Oregon and Brooklyn, New York.

Ennismore enlisted local firm GREC Architects as lead architect for the new 12-storey complex, which is built on a plot that was previously home to a former meatpacking facility in the city's Fulton Market. It is located within the trendy downtown area West Loop, which is also home to members' club Soho House and the Ace Hotel.

The Hoxton Chicago boasts the brand's first-ever rooftop pool, wellness studio, and a two-floor lobby with a coworking space for non-guests.

Ennismore's in-house design team oversaw the interiors deco of the new hotel. It shaped the 182 guest rooms with concrete ceilings and "warehouse-style" windows that allude to the area's industrial past. Two-toned walls of white and muted rose add a subtle warmth.

Ennismore Design Studio also partnered with local gallerist Anna Cerniglia of Johalla Projects to curate an array of artwork that would spotlight "the creative reach of Chicago's art community".

Over 350 individually-themed works of mixed media, from lithography to silkscreen, were placed throughout the property, from guest rooms to communal areas.

Market-sourced antiques dipped in monochromatic paint were built into "immersive maximalist installations" along the hotel's corridors. 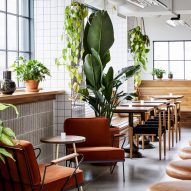 Public spaces were designed in collaboration with global firm AvroKO, whose projects include the The Calistoga Motor Lodge & Spa. Chicago's best-known cultural assets served as a reference for the communal areas, such as the works of the late virtuoso Edgar Miller, post-prohibition-era creativity, and vintage furniture found locally.

AvroKO also designed the hotel's trio of drinking-and-dining outlets, which comprise a Mediterranean eatery, basement cocktail bar, and a rooftop Peruvian-inspired cevicheria adjacent to an outdoor pool and terrace.

A private event space called "The Apartment" overlooks the lobby from the mezzanine and peers onto Chicago's elevated L-train platforms from the windows.

The Hoxton Chicago doubles down on the brand's signature "open-house policy" by designating itself as a community hub for coworking freelancers, emerging artists, and local talent.

The Chicago hotel marks the seventh location of the Hoxton enterprise, which started in London's Shoreditch in 2006. Other properties are located in the Holborn area of London, Amsterdam, and Paris. The company next US venture is also set for Downtown Los Angeles.

Photography courtesy of The Hoxton Chicago.