The Low Collection is made up four objects: a low seat, a high seat, a two-person bench and a low table.

Allan's intention was to respond to forms of "low sitting" that exist around the world, inspired by his background living in China and Spain and his travels in Japan.

Each piece suggests a different way of sitting than a traditional chair or table.

"A lot of countries have a strong tradition of being very low, sitting on the floor," he told Dezeen.

"My idea was to make objects that question what you do with them, so not necessarily prescribing a use but doing something that forces you to engage in a certain way."

The Low Collection was produced from high-quality, kiln-dried oak, which was milled using a specialist CNC machine to create precise geometries.

For each piece, specific curvatures are combined with strict horizontal or vertical lines. Where pieces have been cross-cut, the end grain of the wood creates a grid of distinct patterns. 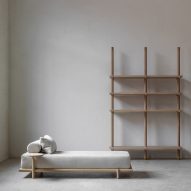 "The scale of each one is designed to maximise the thickest oak that we could obtain," said Allan.

"The great thing about the material is that it really changes depending on the geometry," he added. "The pieces are very solid, the geometry really softens them."

Allan is considered a rising star in the architecture world, thanks to his resourceful approach and responsible use of materials.

This is demonstrated in EBBA projects like Construction Skills School and an apartment refurbishment in Bow.

Low Collection was a project that Allan has been working on by himself. He hadn't expected the designs to become a reality, until Béton Brut founder Sophie Pearce suggested they work together to produce the pieces.

Béton Brut typically only deals with vintage works from the early and mid-20th century, but Pearce felt the works could hold their own against some of the classics.

"Never have such works in wood excited me since Axel Einar Hjorth’s Utö stool from 1932 or Lina Bo Bardi’s side chair for the centre SESC Pompéia from 1980," she said.

Low Collection is on show at Béton Brut gallery from 25 May to 8 July. See Dezeen Events Guide for an up-to-date list of architecture and design events taking place around the world.