Twenty designers have responded to centuries of souvenirs collected by the inhabitants of an Austrian castle in the exhibition East to West at Schloss Hollenegg, which explores the distances and intersections between cultures.

Richly hand-painted fabrics, a tapestry depicting a leopard falling from the sky and a displaced copy of a doorframe feature in the exhibition, which situates the newly created objects in the historic rooms of the castle.

East to West was curated by Alice Stori Liechtenstein, who each year runs the Schloss Hollenegg for Design residency and exhibition programme at her family's castle.

For this iteration, she was inspired by the castle's multitude of Asian objects – brought back as souvenirs that conveyed taste and status – and invited designers to choose a piece from the collection as their reference point for a project.

"In Schloss Hollenegg there are many objects originally from Asia, and visitors often asked how they arrived here," Stori Liechtenstein told Dezeen.

"At the same time, I had been thinking a lot about the concept of displacement and how in the last two years travel habits have changed and people were no longer able to leave or return home," she added.

East to West includes the work of two Finnish designers, Hanna Kaisa Korolainen and Tuomas Markunpoika, who spent time at the castle on residencies supported by the Finnland Institute in Germany and helped to shape the exhibition.

Inspired by a 14th-century Japanese painting depicting the death of Buddha, Korolainen created Hollenegg Fantasy, a 12-metre textile silk-screened and hand-painted with the assistance of Stephanie Klaura, founder of screen-printing factory FabricFabrik in Vienna. It is installed over an existing bed of the castle as a canopy.

The other designer-in-residence, Markunpoika, focused on doorways as a symbolic passage between two worlds and on different understandings of the notion of copying, which does not necessarily carry negative associations in China.

His work, Passage, replicates one of the castle's doorframes from the Tapestries Room and transplants it to the courtyard, rendering it in deep red polymer-coated polystyrene.

Another significant work comes from Austrian designer Laurids Gallée, who collaborated with Berlin-based rug-makers Reuber Henning to make a tapestry called Ladislaus in response to a 17th-century Brussels tapestry in the castle.

Gallée's tapestry has a distinctly contemporary appearance and features a blazing leopard falling from the sky.

Studio Nienke Hoogvliet wanted to challenge the negative associations of the "made in China" label by making something of high-quality, using sustainable materials and under transparent conditions.

Referencing a silk wall hanging, the studio made a cabinet using only materials from the silk production chain – mulberry wood and silk organza. 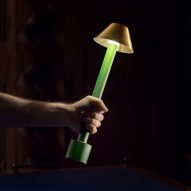 "Studio Nienke Hoogvliet had chosen a particularly ambitious plan: they wanted to produce a piece of high craftsmanship entirely made in China – and on top of that, during the pandemic!" said Stori Liechtenstein.

"There were some very tense moments, but the result is all the more surprising and spectacular because they really did manage to make something precious and beautiful that perfectly combines two aesthetics."

Their works include a portable tapestry-chair that wraps up into its own bag, a series of sculptural wicker objects with human-like feet and legs, a chair hand-painted in the style of classic porcelain, and a computer programme for interacting with updatable records of the collection.

Schloss Hollenegg dates back to the Middle Ages and has been owned by the Liechtenstein family since 1821. Previous exhibitions as part of Schloss Hollenegg for Design have explored themes such as dinner table rituals and the exploitation of nature.

East to West was at Schloss Hollenegg from 7 May to 29 May 2022. See Dezeen Events Guide for an up-to-date list of architecture and design events taking place around the world.