Twenty-one designers have explored the rituals of the dinner table for an exhibition inside an Austrian castle.

Called Ad Mensam after the Latin for "at the table", the exhibition explores the table as a place where people gather to share food and have proper conversations.

It is on show at Schloss Hollenegg, a castle on the outskirts of Graz that regularly hosts exhibitions supporting young designers. The 21 projects are on show throughout the castle's rooms, in site-specific installations.

"We don't eat only to feed our bodies, we meet around a table as a form of communion with other people," explained the exhibition's curator Alice Stori Liechtenstein, who lives at the castle.

Stori Liechtenstein's daughter is becoming a teenager, and starting to question table manners and why meals are taken at the table. This became the starting point for the show.

"Food is nourishment, and at the same time, an excuse to come together and communicate," she continued. "The rituals we have created over the centuries are meant to facilitate this communication and provide us with a much needed sense of belonging."

"The table should be a safe place for everyone. Most of our table manners come from a time when being at the table was still very dangerous as people carried knives, so table manners came about as a way of making everyone feel comfortable and welcome."

Four of the designers on show – Nel Verbeke, Katie Scott, OS&OOS and Katie Stout – were invited to spend time at the castle last summer. The results of these residencies form their work for the exhibition.

The remaining designers offered non-commissioned pieces with a connection to the central idea for the exhibition.

"They used the opportunity to explore the theme, or present something relating to the theme that they have already produced," explained Stori Liechtenstein.

English illustrator Scott collaborated with J&L Lobmeyr on a series of glasses to explore the idea of poison. The glasses are etched with images of poisonous plants as well as their antidotes.

"In a medieval castle, the king or the queen was very scared of being poisoned, and that hasn't really changed. We're always worried about whether we're eating the right things," said Liechtenstein.

"And at the end of the day, our favourite poison is actually alcohol because we have ritualised the way we drink," she added.

Stout worked with Viennese heritage porcelain brand Augarten on a series of dinner plates around the idea of the imperfect woman.

"She worked on the idea of the perfect woman who has the perfect table settings, the perfect menu, the perfect dinner, but she's so perfect that she forgets to enjoy the whole experience and actually eat," explained the curator.

The designer painted the plates herself in Augarten's factory over the course of two weeks, mixing classical motifs with a humorous edge.

Belgian designer Nel Verbeke's work is installed in a room that has never previously been open to the public. The room was restored and repainted.

The artist created the architecture for a tea ceremony, with four marbled alcoves to sit in and a table in the middle that functions as "a sort of altar" for the preparation of the tea.

"There's a space at the centre of the room where you can sit and meditate, or be at peace with people and be quiet and drink tea, or exchange idea, thoughts and feelings," said the curator. "It's a much more meditative piece."

The chalky surfaces of the alcoves were hand-finished by Antoine architectural finishers in muted tones drawn from the colouring of marble.

OS&OOS designed two metal chairs with high backrests "for the archetypal head of the table", one representing the male and the other the female.

These were produced by DiSé, a young Italian producer that specialises in the production of custom-made and limited-edition furniture.

"They definitely have their own aesthetic language, but at the same time it fit beautifully with the colour scheme of the castle," said Stori Liechtenstein.

"Maybe they're a husband and wife, or two friends or perhaps two enemies on either side of the table, and how might that be a conversation between two people."

As well as the idea of sitting down together to talk, Stori Liechtenstein wanted to demonstrate the importance of having a seat at the table for everyone.

"Nothing is more essential to our idea of humanism than expanding that table, symbolically and actually, adding extra chairs and places to include everyone in the conversation," she said.

"The table is a place where you allow different people to have different opinions, and there should always be space at the table for whoever comes along. We should remind ourselves of this every so often." 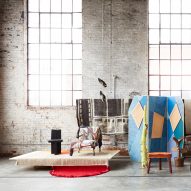 Other projects on show include a rounded bench made from two parts, by Commonplace, which can be either a bench with a table or a table with a bench.

It was produced with Logicdata and is presented in a circular room that echoes the shape of the seat.

Work by Crafting Plastics, Dean Brown, James Shaw, Arabeschi di Latte and others are on show around the castle grounds.

Stori Liechtenstein has been presenting exhibitions as part of the Schloss Hollenegg for Design programme since 2015. Previous iterations have revolved around the the ideas of legacy, constant change and slowness.

Ad Mensam runs until 27 May at Schloss Hollenegg, with a programme of roundtable discussions and concerts.