Architect registration boards in the UK and USA have signed a draft agreement to enable mutual recognition of architecture credentials between the two nations.

Last week, the NCARB ratified the agreement among all of its members, yet the full implementation of the agreement depends on legislation from the UK government as well as further confirmation from each of the American states.

The agreement states that an architect who is licensed with their respective board will be considered licensed in either country.

"One of the primary benefits enjoyed by NCARB Certificate holders is the ability to pursue reciprocal licensure, and this agreement expands those benefits to a new continent," said NCARB president Alfred Vidaurri Jr.

ARB chair Alan Kershaw echoed his American counterpart's statement saying that a "mutual recognition agreement will reinforce this further, helping eligible professionals to register between the two countries, sharing their skills and services". 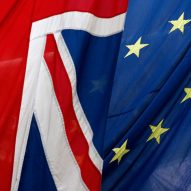 The agreement comes after four years of negotiations between the two countries, with ARB expressing confidence that the agreement will be finalized sometime in 2023.

"We know there's substantial overlap between architects in the UK and USA, and with the high regulatory standards that help protect the public in each country," said ARB director of international and governance Emma Matthews

"Our discussions have been building on this as we aim to support and uphold those standards, while also facilitating collaboration among the profession."

US finds that UK education is sufficient

In 2018, an investigation committee was set up by the NCARB to evaluate the standards of certification in the United Kingdom.

"Based on their analysis, the review team found that a rigorous and standardized registration process is in place in the United Kingdom that parallels NCARB's education, experience, and assessment of competency," said the NCARB.

In the past, architects working between the two countries have relied on the architect of record system that allows foreign designs to be marked for approval by a domestic architect.

This agreement with the US comes on the heels of the end of mutual recognition between the UK and the EU due to Brexit. The ARB does not currently recognize any other certificate outside of the UK besides those issued while the European Union's Mutual Recognition of Professional Qualifications Directive directive was still active. The United States' mutual recognition agreement with New Zealand and Australia was signed in 2017, and the basis for this agreement has shaped the current agreement between the NCARB and ARB.

In 2014, the United States, Mexico and Canada also signed their own mutual recognition agreement.