Designer Lara Bohinc has created a collection of curvy furniture that intends to celebrate the female form, which was on display as part of Milan design week.

Called Peaches, the handmade collection includes three pieces of seating by Bohinc that are available in shades of both bold red and dusty pink.

The Big Girl armchair is the largest piece in the collection. Characterised by bobbly, swollen-looking shapes made from a wooden and steel structure covered with foam and wool, the chair creates a cradle-style seat.

Also made of wood, steel, foam and wool, the Derriere armchair has a similar, low-slung shape while Peachy is a bulging pouf designed to echo the fleshy folds of skin.

Taking cues from the curves of the female form, the designer explained that she wanted to light-heartedly reclaim words regularly attached to women's bodies for the collection.

"Like much of my work, the design is playful and a little bit sexy so I wanted to ensure the names of each piece reflected that aspect of the design," Bohinc told Dezeen.

"The collection was inspired by bosoms and bottoms so I played with words that are often associated with these parts of the body and so we landed on Peaches for the overall collection name and Derriere, Peachy and Big Girl for the individual pieces."

Bohinc used eye-catching hues of red and pink for the furniture, which she said nods to the vibrant colours often found in her work.

"Red and pink are both very sensual, so it felt instinctive to initially present the collection in those two colours," she acknowledged. "Red is also my favourite colour." 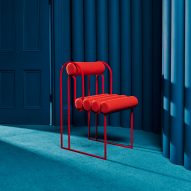 While the seating collection is functional furniture, Bohinc explained that its curvaceous shapes were specifically designed to inclusively celebrate the many varied bodies women have.

"We often see the female form depicted in art, photography and design but so often based on a more slender silhouette."

"However, I was inspired by big voluptuous surfaces that represent and celebrate larger and more shapely curves of the female form."

Presented alongside three porcelain vases by Bohinc, Peaches was on display as part of an exhibition at design platform Alcova during Milan design week, which concluded last Sunday.

Bohinc is a London-based designer who is on the judging panel for the 2022 Dezeen Awards. Her first collection of chairs was informed by the shapes of planets and their orbits while she also previously created a series of interlocking boxes covered in traditional Japanese laquer.

The photography is by Rebecca Reid.