Bohinc Studio has applied urushi, a traditional Japanese lacquer made of tree sap, to a series of boxes made from Katsura tree wood and cotton.

Conceived by Studio founder Lara Bohinc during a two-week residency in Wajima, Japan, the two boxes are made from Katsura tree wood and covered with cotton fabric. Multiple layers of urushi lacquer are then applied to the boxes to make them durable and give a highly polished finish.

To give her urushi boxes a contemporary update, Bohinc used geometric shapes and swapped out the traditional red and black lacquer colours for pastel shades, which she describes as "fresh, lively, and more feminine".

The pastel lacquers were developed especially by master craftsman Nakakado, with whom the British designer worked closely on this project.

"Last year I carried out an artist residency in Wajima, Japan with urushi master Nakakado," Bohinc told Dezeen. "The program is supported by the Japanese government to promote crafts and has a different theme each year."

Wajima is known as the manufacturing heart of the centuries-old urushi technique and traditional urushi boxes are an important part of the Japanese lacquer industry.

"My theme was 'from small to big' and I wanted to reflect on the vanity, which is a huge tradition in Japanese lacquerware; so I thought of jewels and decorative pieces for the body as the smallest objects, and boxes in which to store the pieces as the larger objects," said Bohinc.

"Boxes are very important in Japanese tradition, and are often even more important that the item inside them," she continued. "Urushi boxes are very valuable – the making process is painstakingly slow, sometimes taking over three months just to apply the layers of lacquer." 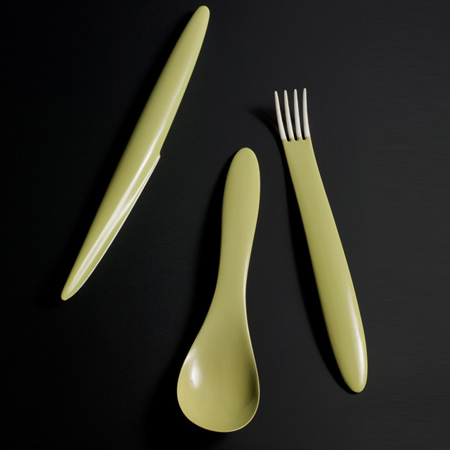 The first box, called Three As One, is a play of slopes and angles made up of two interlocking compartments and one smaller round compartment. The second design called We Are Family consists of one principal box, which is adjoined by a smaller circular one.

Designed to work alone or as one sculptural centrepiece, the boxes' interlocking shapes reference architecture, the Bauhaus and children's wooden toys. They have been made in a limited edition of ten.

"The interlocking parts came from playing with geometric shapes and thinking of various compositions, not just as drawers but also as different visual components," said Bohinc.

"I like to think that there is something completely different stored in each compartment. These very different and contrasting shapes and colours all interlock playfully to create a unified piece."

The process of making the boxes requires time and patience, with each one constructed entirely by hand and coated with up to thirty layers of manually applied lacquer.

The boxes not only mark the first time that Bohinc has created an object using lacquer but also her first time working with wood.

Bohinc joins a number of other contemporary designers who have worked with urushi. In 2009 Aldo Bakker produced a series of lacquered objects each coated in 60 layers of urushi.

Earlier this year Tokyo-based designer Kosuke Araki created a range of tableware from recycled food waste, which he then coated in a thick layer of urushi.