The Architectural Design and Research Institute of Zhejiang University has completed a museum in Shunchang, China, featuring a central void that contains a landscaped public plaza.

Named Shunchang Museum, the building was created for a local investment and development company on the south bank of the Futun river in Nanping City to celebrate local heritage.

Its design by The Architectural Design and Research Institute of Zhejiang University (UAD) is informed by the site and seeks to enhance its connection with the urban setting and the local community.

It also nods to the region's past by maintaining views of the river and nearby mountains, which was a requirement of the project brief alongside creating a bold and modern landmark.

"Designed in response to the local context and based on people-centred principles, the museum is not merely a space that collects and display exhibits," UAD said.

"For the city where it sits, the museum itself is an exhibit, platform and symbol."

The slender site of the Shunchang Museum extends east to west along the riverbank. Its south side faces Longshan Mountain, while its northern edge looks onto a waterfront walking trail.

Inside there is a museum, urban planning exhibition centre, offices and storage for cultural artefacts. Further public spaces incorporated into the scheme include an auditorium, library and cafe.

As the museum is dedicated to local heritage and doesn't display any well-known exhibits, the architecture focuses on its connection to its surroundings as well as on creating spaces for community use.

The structure follows the long, linear plot and preserves a route between the city and the riverbank by lifting up in the middle to form a large atrium.

This central void frames a view of the sky and encloses a plaza that provides a space for public gatherings and everyday activities.

"This area creates an 'urban living room', which blends into the urban setting in an open gesture," UAD said.

"This place is enlivened by skateboarders, buskers and dancing groups. It provides a venue for the citizens' daily activities and cultural events, and in turn is enriched by the citizens," the team added.

The plaza contains the main entrances to the museum and the urban planning centre, which are split into two wings at opposite ends of the building on the ground floor.

The two wings each feature a large central hall with curving staircases and ramps ascending to exhibition spaces on the upper levels. Curved trusses that span 48 metres allow the ground floor to remain open and column-free.

In the main museum wing, there is a temporary exhibition hall and auditorium with their own dedicated entrances and associated amenities.

Encircling the void on the second floor is a cultural space and library that connects the two wings. A ramp extends from this level to a roof terrace that can also be accessed from the riverside trail using an external stair.

The interior spaces are lit by glazing around the central atrium. Offices on the upper floor also receive natural light from a roof garden positioned on the southern side of the building. 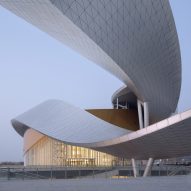 The windows surrounding the void reflect views of the sky, as well as a large tree that was moved to the plaza from its previous location on the site to act as a symbol of the area's history.

Triangular stainless-steel panels applied to the underside of the atrium's suspended ceiling form another reflective surface that produces mottled patterns of light and shadow during the day.

The shiny steel contrasts with the rough granite applied to the majority of the Shunchang Museum's exterior.

This stone, which was hand-cut, evokes the rugged character of the nearby mountains and introduces a natural element to the urban environment.

UAD was established in 1953. It previously completed a hall for the Shaoxing Hotel that fuses traditional and modern elements, as well as a museum in Qingxi that uses a palette of local materials informed by the surrounding landscape.

Other recently completed museums in China include the pyramidal Datong Art Museum by Foster + Partners and the sweeping Suzhou Bay Cultural Center by Christian de Portzamparc.

The photography is by Zhao Qiang.