The Architectural Design and Research Institute of Zhejiang University has completed a new hall for the Shaoxing Hotel in eastern China.

The large, triple-height central hall was built to connect the hotel to the natural surroundings of the site in the city of Shaoxing, fusing traditional Chinese architectural elements with modern forms and materials.

"We tried to avoid drastic rebuilding and seek an artful fusion of landscape so as to build an urban forest looking out towards the city," explained the Architectural Design and Research Institute of Zhejiang University.

Sweeping roof forms, designed to mimic the contours of the surrounding mountains, cover the central hall.  Thin colonnades run in front of both the north and south entrances, sheltered by the roofs large overhangs.

A mixture of dark brick and wood, white walls and copper-clad columns help blend the large structure into an adjacent wooded area.

The existing hotel buildings include examples of traditional Chinese structures, and the hall mediates between these old buildings, the landscape and its modern requirements.

"In the process of design, we reorganised the natural and traditional elements – mountain, stone, roof, window, column – into the new architectural form as significant symbols," said the architecture studio.

Along the east and west edges of the hall, ancillary rooms have been arranged to not obstruct the main axis through the building. 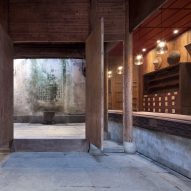 These elevations, which face out onto garden paths, have been treated with patterned metal screens. Lit from behind at night, the screens create a lantern-like effect.

In the gable ends created by each roof section, glazing has been introduced, creating areas of clerestory lighting covered with a geometric metal pattern.

Behind the colonnades, the glass facades of the hall have been covered with wooden panels cut with thin slits, providing some privacy while allowing light into the building.

A shiny stone floor in the hall helps reflect light throughout the space.

Similar traditional forms and garden spaces can be found in Archi-Union's project for a restaurant and club in Chengdu, with a "wavy" facade created by using different sizes of bricks.

Photography is by Zhao Qiang unless stated otherwise.