Spanish fashion brand Loewe has reopened its Barcelona flagship, which it has transformed into a gallery-like space with an undulating bamboo installation that winds across its surfaces.

Casa Loewe is set inside Casa Lléo Morera, a modernist building created by Catalan architect Lluís Domènech i Montaner off one of the Spanish city's major shopping streets.

The flagship was renovated to create a gallery-like space and restored to highlight the 19th-century building's original features, including gold-leaf detailing that adorns the ceilings.

As craft is an integral element of Loewe's identity, a key goal for Casa Loewe's interior scheme was to showcase various artists and artwork.

Anderson filled the store with installations and objects that the brand explained epitomised innovation and craftsmanship, including sculptures by winners and finalists in the brand's Craft Prize.

A centrepiece of the interior is a twisting bamboo installation by Japanese artist Tanabe Chikuunsai IV, which weaves across the store's ceiling, walls and structural columns.

The installation, titled Yūgo, was crafted from 6,000 pieces of tiger bamboo woven together to create the winding tubular forms. 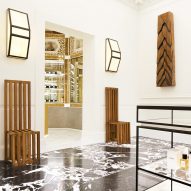 "It was important for me to express Loewe's tradition and innovation while creating a work that merges the building and the bamboo installation together," Chikuunsai IV told Dezeen.

"[Anderson's] essence is his passion for materials and creating innovation while maintaining tradition," he said. "Thus, I wanted to create something that fuses art, fashion, and nature together in order to form a futuristic and creative universe."

Alongside Chikuunsai IV's bamboo installation is a macramé structure by Catalan artist Aurèlia Muñoz. It is suspended from the ceiling of the ground floor in front of a blue tile-clad wall, which was created by Ceràmica Cumella.

Ceràmica Cumella also erected ceramic-clad columns across the store in varying shades of white and blue to reference the Mediterranean Sea.

Iconic furniture pieces are dotted throughout Casa Loewe on top of its concrete floors, including Gerrit Thomas Reitveld's Utrecht chairs and an oak arts and crafts armchair by William Birch.

Other recent projects by Loewe include the costume design for an immersive installation at London's Tate Britain in 2018, developed in collaboration with Anthea Hamilton.

Other retail spaces recently featured on Dezeen include a Balenciaga store clad in pink faux fur, which is featured in our roundup of ten weird and wonderful shop interiors.

The photography is by Adrià Cañameras unless stated otherwise.