Cologne-based designer Carsten in der Elst has explored how to create furniture from industrial byproducts with his Soft Works collection, which was exhibited during the 3 Days of Design festival.

Soft Works is a continuation of In der Elst's Heavy Duty project, which was showcased as part of the Ukurant exhibition at last year's 3 Days of Design and featured products made from forged steel and shotcrete.

This time around, while the designer worked with a number of the same manufacturers to use materials that would have otherwise gone to waste, he chose to focus on softer materials, including cork, silicone and leftover mattresses.

The pieces for the exhibition, which were all made by In der Elst in his studio, came about because the designer wanted to focus on the process of making.

"I really like the simplicity of the concept – it's about the material and about the making," he told Dezeen.

"I started my solo practice out of the Covid-19 situation and I had to get back to this idea of 'how can I produce autonomously?'" he added. "This is the result of just being in the studio, by myself, with a lot of different materials."

Among the pieces on show at the Tableau store and showroom in Copenhagen is Foam Seat, a large armchair set on wheels that is made from polyurethane foam, an industrial byproduct sourced from a mattress factory.

The spongy chair was then manually covered in a polyurethane coating that creates a smooth, shiny surface.

The same material was used to create the seats for the Aluskin Sofa, which has an aluminium frame and soft seats made from polyurethane. These were one of the trickier things to create, according to the designer.

"With the expanding foam materials, when it's liquid you have 15 seconds to pour it and then it rises like a loaf of bread," In der Elst said of the sensitive process.

In der Elst is also showing Wax Lights – steel lights that have a moulded paraffine wax cover – and the playful Accession chairs made from steel and natural latex tubes.

The tubes have been threaded through the backrest and seat of the chair to form cushioned, soft surfaces, creating a fun look that resembles pasta tubes.

The designer also painstakingly constructed Silicone Dome, a small stool covered in a myriad of decorative dots made from silicone that were all individually hand-piped onto the surface.

For In der Elst, both Heavy Duty and Soft Works are a way to showcase what can be done using waste materials, while also drawing attention to the importance of making connections between manufacturers and designers.

"Heavy Duty was the starting point not just for the practice or the manual making, but also for the connections," he said. 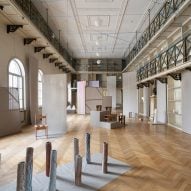 "This is something that's not really talked about in the design scene, that you have a to put a lot of work into connections that nobody will ever know about," he added.

"If you know this one metal guy, maybe that's not the right metal guy; you have to go to another one and you have to search for them."

He hopes the exhibition can be a way for him to share his manufacturing connections and ideas with other designers.

"People keep connections secret and I don't really understand that, because those metal workers have to survive," In der Elst said.

"If another designer approaches them, I'm super happy to give them work," he added.

"I try to be extremely transparent with not just the process, talking about it and showing it, but also with information such as where did I make it, how was it made, and where did the idea originate?"

While this exhibition focused on soft materials, for his next one In der Elst plans to go back to more solid structures again.

"After these soft materials, I would really like to just do the opposite again, go back to stone or something similar," he said.

"I'm actually going to have a group exhibition in London where I have to produce something from stone," he added. "I'm going to use quarry byproducts; a heavy, huge pile of beautiful byproducts."

Also on show at this year's 3 Days of Design was a translucent pavilion designed for furniture brand Fritz Hansen and a steel-clad event space.

The photography is by Michael Rygaard.

Soft Works is on show at Tableau, Store Kongensgade 50, from 12 May to 3 July 2022. See Dezeen Events Guide for an up-to-date list of architecture and design events taking place around the world.

More from 3 Days of Design