Expanses of brown paper covered the floor, with the edges of each brown sheet visible and slightly curled.

Rolls of white paper were unfurled to form a series of rooms with ten-metre-tall walls, doorways and windows that look as though they were drawn by a child.

"We wanted to create an atmosphere that conveys softness and modesty in the context of a world in which aggression is increasingly present," said OMA project architect Giulio Margheri.

"We took the idea of a simple house, as if drawn by children, and scaled it up to the size of the Deposito, the space at Fondazione Prada that hosts the fashion shows."

Paper rolls were organised at different heights to create oversized doorways that lead to the following rooms and fixed, at their raw edge end, to metal truss systems that span across the ceiling of the Fondazione Prada.

Large openings, shaped like four paned windows, pierce the layered paper walls of the show space and provide glimpses of the room beside.

Miuccia Prada and Raf Simons, Prada's co-creative directors, combined contradictory materials, styles, fabrics, silhouettes and cuts in an effort to create an expression of choice for its wearers. 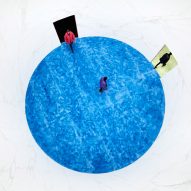 "For Prada's fashion shows we've always worked with materials that are not very expensive," said Margheri. "Today more than ever the idea of luxury is questionable when there is a shortage of fuel, materials and food."

"Paper is a simple material; it's the basic surface onto which we architects express our ideas. In this project, we wanted to explore its qualities as an architectural element, but in a playful and naïve way."

Guests were seated in two rows along the walls of the paper rooms on cubic chairs formed entirely from corrugated cardboard.

Lone gingham-printed, oversized paper curtains – that match the red gingham of the coats appearing alongside them– were placed sparingly beside windows throughout the space.

The red and white printed curtain stretches from the top of the paper walls to the floors and was accordion folded to mimic that of neatly gathered fabric.

Prior to the show, invitations were delivered to guests via means of a paper coat, which was neatly folded within an envelope and featured relevant show details printed across its back.

The coat-cum-invite was constructed from Repap – a material derived from stone dust and resin – and was held together at its seams by running stitches.

Prada has been a long collaborator with AMO and has seen Koolhaas design show spaces for the storied fashion house since 2004.

For Raf Simons' debut collection as co-creative director, the research studio created a series of faux-fur-covered geometric rooms that served as a backdrop for its Autumn Winter 2021 menswear show.

For Prada's Autumn Winter 2022 show, AMO installed cinema seats and a tunnel-cum-runway that references the spacecraft in the film 2001: A Space Odyssey, to the Fondazione Prada. The same set was later reused for Prada's following womenswear show in February 2022.

Photography is by Agostino Osio, courtesy of Prada and OMA.