The glass and metal "sepals" of the sculptural Glasshouse by British designer Thomas Heatherwick can be seen unfolding in this short video filmed at Woolbeding Estate in England.

Located in the gardens of the historic property in West Sussex, the Glasshouse is a sculptural and kinetic greenhouse filled with 300 species of subtropical trees and plants.

It is constructed of 10 steel and glass components that Heatherwick Studio describe as "sepals" – leaves that protect the buds of growing flowers.

These elements are engineered to open using a hydraulic mechanism and provide sunlight and ventilation for the greenery encased within them. 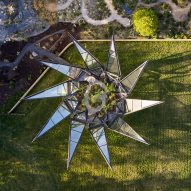 Heatherwick Studio designed the Glasshouse with the National Trust and The Woolbeding Charity as a feature for the new Silk Route Garden in the Woolbeding Gardens.

The studio said the structure was informed by Victorium terrariums and intended to resemble a jewel within the landscape before opening into a pointed crown-like form.

It also serves an educational purpose as both the garden and plants within the conservatory were landscaped to illustrate how the Silk Road – an ancient network of trading routes between Europe and Asia – has influenced the development of British horticulture.

Find out more about the Glasshouse here ›

The video is courtesy of Heatherwick Studio.