The collection, which was designed by the brand's creative director Jonathan Anderson, was created as an amalgamation of nature and technology and a "fusion of the organic and fabricated", said the fashion brand.

It saw shrunken and swollen silhouettes, grasses growing from denim and shoes, relics of obsolescent technology fused onto leather and screens stitched and suspended across the bodies of models.

Loewe's plant sprouting garments were the product of a collaboration between the Spanish fashion house and Spanish bio-designer Paula Ulargui Escalona.

Escalona cultivated cats wort and chia onto the bodies of hoodies, sweatpants, jeans, shoes and outerwear in a purpose-built polytunnel greenhouse for 20 days in the lead-up to the show on 25 June.

Each of the sprouting garments required regular watering to ensure the health of the plants was maintained for the show.

As a result, garments appeared on the runway soaked and sodden – made visually apparent from watermarked jersey hoodies and sweatpants.

"The idea is that over time the pieces merge with nature," said Loewe.

Screens projecting images of birds, sunsets and marine life were fixed, stitched and suspended across the exterior of coats and tops like LCD patchwork. 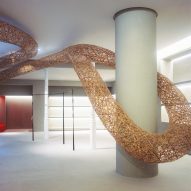 The show took place in a cavernous, white-painted venue described as a "mind-expanding environment." Loewe built a giant sloping volume that became an angular runway for the Spring Summer 2023 collection.

The starkness of the show space was intended to play off the collection's concepts of the natural and fabricated, creating an almost clinical and laboratory-style space.

White-painted bleachers oriented Loewe's guests at the bottom and directly in front of the sloped volume, which offered views of each model appearing from the back-lit horizon.

"The real and the digitally reproduced," said the brand. "Nature and technology meet within a glaringly white, mind-expanding environment. A collection that juxtaposes to entice new perspectives."

Loewe recently reopened its Barcelona flagship store, which it transformed into a gallery-like space and features a twisting bamboo installation by Tanabe Chikuunsai IV.

The photography is courtesy of Loewe unless stated otherwise.